Once project topic is confirmed by Professor Chris Szalwinski), I will be able to proceed with topic research.

There are decisions to make regarding, if even you SHOULD parallelize your program, what method or libraries should you use? To compare two specific possibilties, is it better to use standardized C++ solutions, or Thread Building Blocks?

The main issue with parallelism as it exists currently in C++ is that it is very much a Wild West scenario where external companies are the ones flagshipping the parallel movement. That isn’t to say that there are no options for parallelization in C++ natively, but aside from experimental and non-finalized solutions there is not much more to work with other than std::thread to manually create threads, or the Boost library.

That said, while the C++11 standard solutions are considered ‘experimental’, they are largely functional and comparable to TBB functionality in most cases in terms of efficiency.

The Standard Template Library (STL) is a software library for the C++ programming language that influenced many parts of the C++ Standard Library. It provides four components called algorithms, containers, functional, and iterators. As early as 2006, parallelization has been being pushed for inclusion in the STL for C++, to some success (more on this later).

TBB (Threading Building Blocks) is a high-level, general purpose, feature-rich library for implementing parametric polymorphism using threads. It includes a variety of containers and algorithms that execute in parallel and has been designed to work without requiring any change to the compiler. Uses task parallelism, Vectorization not supported.

Since 2006 an intimate week long annual conference related to Boost called C++ Now has been held in Aspen, Colorado each May. Boost has been a participant in the annual Google Summer of Code since 2007.

The Parallel Patterns Library (PPL) provides general-purpose containers and algorithms for performing fine-grained parallelism. The PPL enables imperative data parallelism by providing parallel algorithms that distribute computations on collections or on sets of data across computing resources. It also enables task parallelism by providing task objects that distribute multiple independent operations across computing resources. To use PPL classes and functions, simply include the ppl.h header file.

Classes that simplify the writing of programs that use data parallelism or task parallelism. 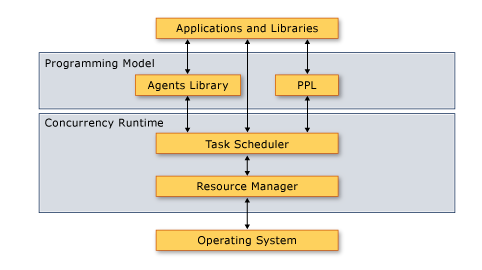 The Task Scheduler schedules and coordinates tasks at run time. The Task Scheduler is cooperative and uses a work-stealing algorithm to achieve maximum usage of processing resources. The Concurrency Runtime provides a default scheduler so that you do not have to manage infrastructure details. However, to meet the quality needs of your application, you can also provide your own scheduling policy or associate specific schedulers with specific tasks.

Not relevant to this comparison, .NET Framework.

C++ AMP accelerates the execution of your C++ code by taking advantage of the data-parallel hardware that's commonly present as a graphics processing unit (GPU) on a discrete graphics card. The C++ AMP programming model includes support for multidimensional arrays, indexing, memory transfer, and tiling. It also includes a mathematical function library. You can use C++ AMP language extensions to control how data is moved from the CPU to the GPU and back.

Tiling divides threads into equal rectangular subsets or tiles. If you use an appropriate tile size and tiled algorithm, you can get even more acceleration from your C++ AMP code.

*A note on AMP and tiling

AMP does not properly compile on the visual studio 2015 platform, it must be run using libraries before VS2015. Tiling does not seem to be supported on the Intel Compiler as well. 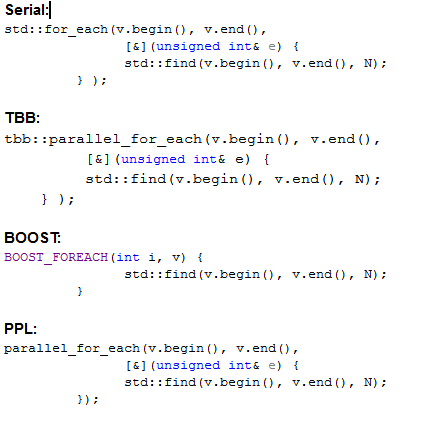 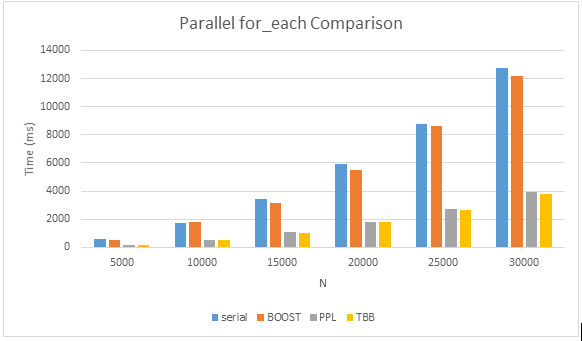 Let’s compare a simple sorting algorithm between TBB and STL/PPL. 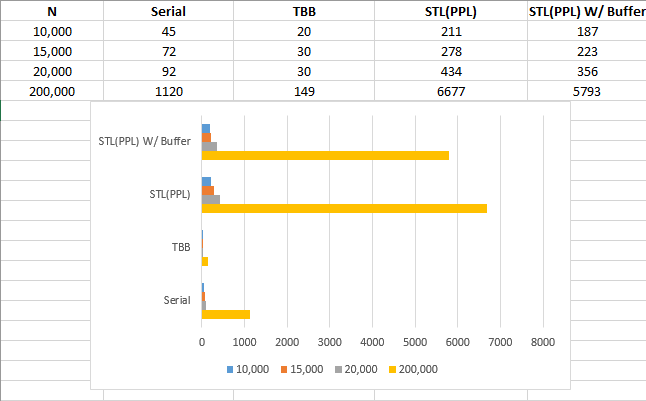 The clear differentiation in the code is that TBB does not have to operate using random access iterators, while STL’s parallel solution to sorting (and serial solution) does. If TBB sort is run using a vector instead of a simple array, you will see more even times.

The conclusion to draw when comparing TBB to STL, in their current states, is that you ideally should use TBB over STL. STL parellelism is still very experimental and unrefined, and will likely remain that way until we see the release of C++17. However, following C++17’s release, using the native parallel library solution will likely be the ideal road to follow.