Much like everyone else in our course, I have never compiled Firefox. All of my Firefox experience is limited to what I did during the summer, which is not much. Everytime I thought about building firefox, thoughts along these lines started going through my mind:

But since I was required to build the source in this course, I had to figure out Step 2. And here it is:

Here is a list of software that I installed and used during the build. Obviously we need a compiler so Visual Studio 2005 came to mind and also we require some sort of UNIX runtime environment. Putty is required only because we had to tunnel out of the school intranet to the outside, else CVS would not work (more on this later).

This is where the fun starts. I basically followed David Humphrey's instructions on his website which outlines, in detail, the steps required to build Firefox. I had to slightly modify his steps to bypass the Seneca firewall, which ill point out later. The build instructions are as follows:

The first problem I had was with the school intranet system. The administrators have the school have this place locked up tighter then Fort Knox. Therefore, I was required to do a little bit of tunneling in order to get my signal out of the school. Tunneling is achieved by using Putty and one of our UNIX servers such as Matrix. By doing this, I created a tunnel form my machine through Matrix and into the internet, bypassing all the firewalls and bandwidth prioritizing technologies the administrator’s setup.

The second problem I encountered was with the newer version of make. I started to build Firefox and about an hour into the build make died and gave me an error. I inquired in #developers and they immediately told me that I was using the wrong version of make. I downgraded make to version 3.80 and everything was fine and dandy.

Lastly, during the initial build process, I read an error that make could not find nsis, the installer code that bundles the executable. I decided to immediately ditch the process and add the line ac_add_options --disable-installer to the .mozconfig file.

Woohoo, I did it. The build instructions that Dave provides on his website work great but with a minor modification in order to bypass Seneca’s firewall. Other then that, it’s pretty easy but it takes a long, long time. Also, make sure to use make 3.80 and not anything else because it breaks the build. You don’t want to sit there for 2 hours compiling and having it break right before it finishes. 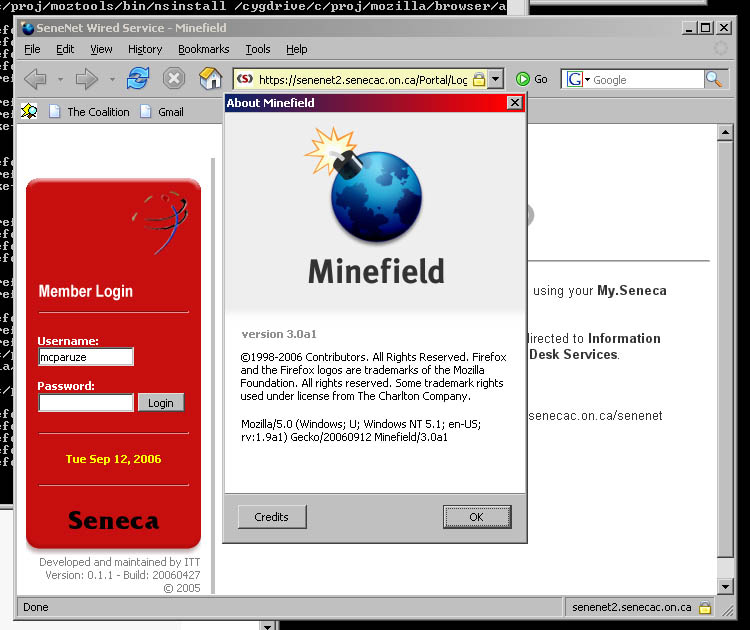