I built Firefox merely a day before the deadline due to busy schedule. Unfortunately, this means I had a fair share of horror stories from other peers in the course who had gone through the mire. On the other hand, this circumstance allows me to receive plenty of support and advice from them, of which I am grateful.

I use the following system to build my Firefox:

For the preparation for the build, I first read the Mozilla Development Center Build Documentation, but quickly ran out of patience. Then I found another website that offers a more compressed set of instructions.

Compared to the initial setup, the building process is not complicated, but more messy in comparison, due to my being clueless at the entire process. The process took many retries due to various problems, which will be discussed later. Here's the successful step-by-step process.

The entire process took around 25 minutes to download the files and 90 minutes to complete the compilation. At first I had a bunch of applications running while Firefox compiled, making it slow. Closing most of the applications could have hastened the process.

Once the process is done, I checked C:\proj\mozilla\firefox-objdir\dist\bin, double-clicked the mine, got roughed up a bit by error messages, and found the Fox running.

Despite the instructions above, the process was far from smooth. I was derailed many times due to various issues. Here is the list of problems encountered, and how I managed to solve it.

Problem 1 : Use MOZ_CO_PROJECT to specify a project for checkout..

During the first run, I used this command to download the files.

The downloading process never started, and the screen displayed this error.

This message was confusing, as many references instructs this step without any hassle. I supposed MOZ_CO_PROJECT is some kind of flag I have to set in order to run the process. I decided to read other submissions and found a solution in Philip Vitorino's page. Here's the corrected command:

Later I discovered that I could have avoided such headache if I had had the time and patience to read the contents of client.mk. The file contains a documentation on how to use the flag to choose the Mozilla suite to download.

Once the compilation is finished, I searched mozilla\firefox-objdir\browser\apps and found Firefox.exe, which I immediately ran. The program crashed immediately with this pop-up error:

Only later that I found the correct file to run at mozilla\firefox-objdir\dist\bin. Multiple executables located in the trunk can potentially confuse anyone who didn't bother to read directions...

When I double-clicked the (right) Firefox.exe, the program ran immediately, but when the About window is displayed, it displayed version 1.5.0.7. Alarmed, I contacted Sherman Fernandes, who advised me to turn off all opened Firefox windows (which I used to display references). The problem was immediately resolved.

Various sources instructed not to use make 3.81, which can be included in the Cygwin installation, so I left it unchecked. During installation, I found myself not having make.exe at all. Luckily, Elizabeth Chak's submission conveniently provided a link. 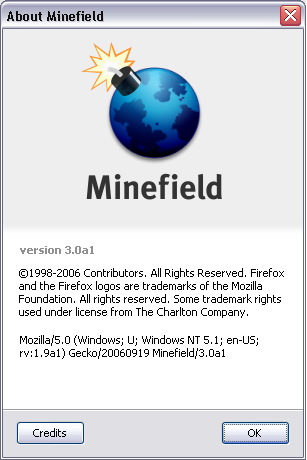 To be honest, I haven't been involved in large-scale programming project before. This is the first time that I encounter a compilation process longer than 15 minutes. The compilation process itself looks like a bunch of gibberish flashing through my screen in extremely high speed. In a way, the whole process makes me feel stumped.

On the other hand, this is the first exposure to a large-scale project involving a lot of people. During the compilation process, I feel as if I am walking through a museum hallway, inspecting the works of giants in my chosen profession. Nothing can replace the feeling of being part of that community, and the fact that I have the potential to contribute to this giant undertaking.

In conclusion, the process has been both eye-opening and humbling. I look forward to being more involved in the Mozilla project in the future.