I first started off building Firefox on my Windows XP Professional machine using Visual Studio.Net 2003. Unfortunately I had some problems along the way and solved them by using Google.com and by asking for help in the IRC chat. When I finally built Firefox I tried to run it but wasn’t successful because it crashed on me. So I tried building it on two other hard drives and I got the same error. Since I was short on time I decided to give Linux a try and see if I would be more successful with building Firefox on a Linux operating system.

I was finally able to build Firefox successfully on Ubuntu, which took me about one night to do. This document will cover the build requirements such as hardware and software that I needed in order to build Firefox successfully. I will then discuss the steps that took me to fully complete the build and any problems that I encountered along the way. I will end it off with some useful resources that I found and used throughout the process of the build and then talk about my experience with my first open source build.

Before I could install any packages or libraries I had to install build-essential, which is the synaptic package manager (i.e. Library Manager). Once I got this installed I looked at Linux Build Prerequisites to find out which libraries I needed. The following are a list of the libraries that I installed.

During my Firefox build in Ubuntu I came across two errors that took me awhile to figuire out, since I was not familiarized on how Ubuntu worked.

One of the errors I faced was to do with two missing packages not being installed.

I solved this problem by first using Google to find a solution. I couldn't find a solution online so I tried asking a classmate who had built Firefox to see if they would be able to help me. I was then told to install two packages libidl-dev and libgtk2.0-dev from the synaptic package manager. After the installation of the packages the error was solved.

On my second build I came across another error that had to do with another missing package.

I solved this problem by first using Google to find a solution. I found a solution online that stated for me to install a package which I had already installed, so this was obviously not of use. I then posted my error on Paste Bin and pasted the link on the IRC Chat in the #Seneca room. Philip Vitorino told me to try and install a package called libxt-dev and see if it solved the problem. It definitely solved the problem and I was able to build Firefox completely. 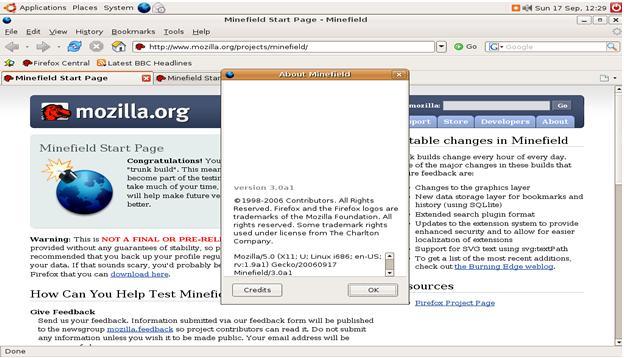 Here are some links that I found useful and helped me in the process of building Mozilla Firefox:

Also got some help from people in the IRC Chat in room #Seneca. The name of these individuals are as follows:

I would like to thank you all very much for taking the time to help me with the problems I faced when building Firefox.

This whole process of building Firefox has been an experience that I plan on taking with me where ever I go. I have never worked on such a large project, and having the opportunity to be a part of it was very exciting. Since this was my first time building an open source project I must admit i did get a bit fustrated since I wasn't sure what I had to do or what I needed in order to build Firefox successfully. I got some useful information from Tom Aratyn and Dave Humphrey who first helped me out with trying to build Firefox on the Windows platform. Their information and the information I found on Google helped me to understand what I needed and what I had to do.

Since my Firefox crashed on my Windows platform when the build finished, I decided to try the build on Ubuntu. Installing Ubuntu was a challenge since it was my first time installing a Linux operating system on my machine. After the installation I got even more confused on where to find things. I took some time to get familiarized with the interface which I picked up after a couple of minutes of looking around on the desktop. During the process of building Firefox I started to get confused when I read on the internet that you had to install specific packages and libraries. When I read this I automatically thought that I had to download the package and libraries from the internet. But then I figured out that I just needed to type a command in the terminal to install packages and install the library manager. This was one of the things I found really confusing, but now I am getting used to the Linux environment and plan to keep using it in the near future.