The armv5tel architecture version is supported by some common devices such as the Marvell Feroceon processors used in most plug computers. However, later versions of the architecture support advanced features, and using armv5tel code on those processors may result in suboptimal performance.

This project will research ways that Fedora-ARM could support higher processor versions effectively without recompiling the entire Fedora package universe -- for example, by providing an armv7 + hardfp glibc and kernel. This involves performance testing across multiple devices.

My fellow classmate, a great and helpful guy working on the To Thumb or Not to Thumb Project. We both have the same project objective; to benchmark a system. (his project deals with 16-bit codes) We share access to the test builder cdot-beagleXM-0-3 and even ran tests both at the same time that could have toasted it! Tyler helped me out with with scripting/'makefiles' and using 'screen'.

What the project is all about

Currently, Fedora only supports armv5tel codes. With the release of armv7 architecture (with beagleboardXM) Fedora-ARM is pressed with the decision of upgrading its Fedora Universe to use armv7 code. While it seems logical, re-compiling the whole Fedora package is a strenuous task. Before deciding to recompile the whole universe, Fedora-ARM can test if optimizing certain system binaries to use armv7 architecture provides significant performance difference against the currently used armv5tel codes. The test would clarify if armv7 codes used for armv7 hardware really improves system performance.

This project aims for that sole purpose. By running a benchmark and compiler optimizations on system binaries, Fedora-ARM can contrast both technologies and use the results to decide if it's really worth to recompile the whole Fedora Universe to use armv7 codes.

There are currently 2 ARMv7 (beagleboard & beagleboard XM) builders in the Fedora ARM farm. These builders are running builds on ARMv5tel. This project will focus in using the beagleboardXM builder cdot-beagleXM-0-3

Specifications for the cdot-beagleboardXM-0-3 builder 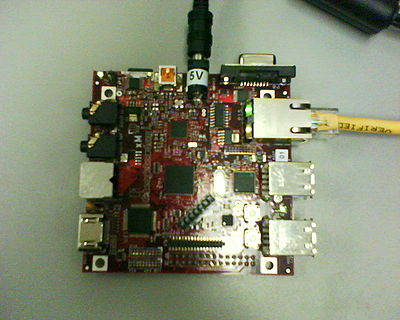 Goals for each release:

[0.1] Optimize and run a benchmark program specifically designed to make use of glibc

Any packages compiled for the beagleboards can be installed without optimization. So far, in the case of cdot-beagleXM-0-3 packages are compiled without it. Without optimizations, software installed in a system can only run on sub-optimal performance. In order to make use of ARMv7 architecture features, editing the CFLAGS to use arm optimization options will let the compiler attempt to improve the performance and/or code size of the program; resulting in a more efficient/faster system.

The goal of this release is to run a benchmark software named Dhrystone on cdot-beagleXM-0-3 and record the results. Three (3) runs are required: No optimization, Optimized for armv5tel, and Optimized for armv7. Dhrystone is chosen as the benchmark software mainly, to test the general system performance of cdot-beagleXM-0-3 and to test how much performance gain can be expected from optimizing a program. Other reasons include: 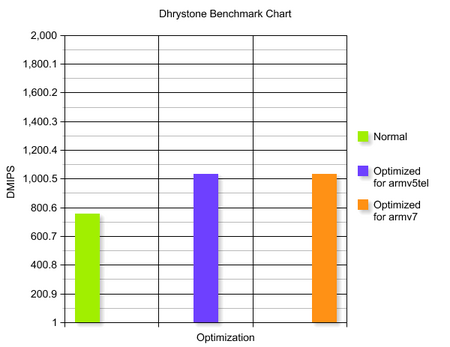 The benchmark graph shows that optimization increased the overall performance of cdot-beagleXM-0-3 by 36% (Normal run vs. Optimized for armv5tel/armv7). The results for both armv5tel and armv7 optimizations are the same. (It can be assumed that the armv5tel glibc impacts the performance of C library dependent programs such as Dhrystone). Another possible reason is that the compiler used is already armv7 optimized (since dhrystone also relies on the compiler efficiency) The data gathered can be used as a reference for conducting 0.2 project release.


[0.2] Install an armv7 glibc and re-run the benchmark using dhrystone

The goal of this release is to find out if upgrading the armv5tel glibc would affect the performance of a C library dependent program such as dhrystone. By re-installing glibc using armv7 optimizations and re-running an armv7 optimized dhrystone; a better benchmark result is expected (Higher DMIPS). The result would be beneficial for Fedora-ARM, for it will help the community decide if armv5tel codes should continually be supported.

In order for a successful glibc armv7 build, the file /usr/lib/rpm/redhat/rpmrc needs edit to use armv7 build options. Using mock; a downloaded glibc source can be rebuilt. Once finished, the binaries can then be installed locally to the system using rpm OR a local repository can be created enabling the use of yum.

The Dhrystone (DMIPS) results never changed. The benchmark brought the same, exact number of DMIPS. Although Dhrystone does make use of C library functions and is assumed that the glibc would have effects on the program; the results proved that upgrading the glibc did not bring what's expected.

It is proven that armv7 and armv5 arch optimizations provide the same level of performance especially when running C library dependent programs on cdot-beagleXM-0-3 builder. Why is it possible when armv7 architecture is supposed to be better than armv5tel? One big answer is that the system tested was built to use an ABI called "softfp". Although beagleboardXM (cortex-a8)supports the "hard floating-point" ABI, The Fedora-ARM currently can't afford to waste time building a system that supports "hardfp" solely on test purposes. To make things a little clearer, cdot-beagleXM-0-3 can't use the technology offered by ARM-cortex-a8 processor because of how the system (down to the lowest level) is built.

ARM Floating point is a pretty big topic, provided are some links to help you understand more.

In conclusion, Fedora-ARM can continue to use armv5tel codes on armv7 machines. Deciding to recompile the whole universe for armv7 is somehow an inconvenient recommendation for now.

The previous test didn't leave an opportunity for me to work on [0.3] Release. Although the comparison is done, and the results are gathered; One last option to test armv7 technology still remains: "Rebuild everything to use a hardfp ABI!" This recommendation would undoubtedly reveal the performance difference of armv7 against armv5tel; but at the same time would be a big project "not suitable for a single person to work on".

I hope that this project page including the Dhrystone How To page can be of use for future ARM based project reference.

A guide for using Dhrystone benchmark