Originally there was only one "email" protocol: SMTP. It was designed to address, route, and receive messages for a destination user on a destination server. Later an extra couple of protocols (POP3 and IMAP) were developed so that people wouldn't have to read their email on the command-line on the SMTP server. Now there are many components, making a powerful, reliable, but complex system. Here's a simplified diagram of what typically happens when you send an email to someone else: 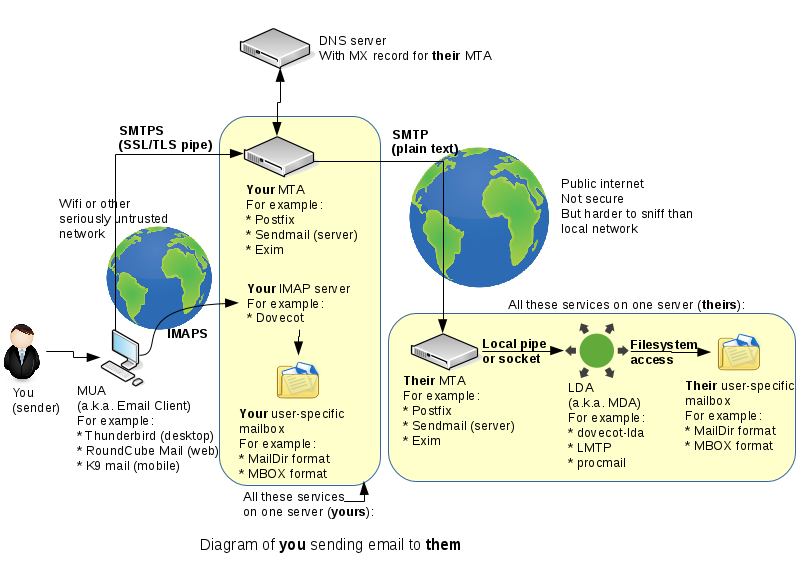 By the end of this course you should be familiar enough with all these components to be able to speak about them comfortably.

Email used as you're used to it requires a couple of DNS entries. One A record for the server, and on MX record for your domain.

Remember that DNS records are cached, so if you make a mistake: you'll need for the TTL to expire before you can test your updated records. One way too give yourself two chances to get it right is to first test your MX record on the router. Then if it's wrong: you can test your second attempt on your workstation before the TTL expires on the router's caching DNS server.

For the www VM we set up an external storage device so that we wouldn't lose our website if the server was damaged or deleted. We'll do the same for the email VM. You can look back at lab 3 if you need a reminder for how to do the following steps.

Don't get locked out
With the setup we're building all the emails will be stored in each user's home directory. That means lv_email will need to be mounted on /home. That makes it tricky because other important things (like your SSH keys) are stored under /home as well, so be careful with the following steps, you may end up locking yourself out of your VM, and you'll have to rebuild it.

There are many SMTP server software on Linux to choose from. Postfix is the most used commonly used so that's the one we're going to use. It can be configured to do all sorts of advanced and interesting things, but we'll keep it simple. Once you feel less overwhelmed with all the exotic configuration options: it will help you to read the description of what those options do, over time the meaning of those comments will become more and more clear.

Postfix is installed by default on Amazon Linux, but it only listens on localhost, it will not accept inbound connections to port 25 even if the firewall allows access to that port.

People often think of SMTP servers as "sending" servers, but they are responsible for receiving email too. Since setting up a full email client involves many steps, and at least two services: we'll test access to the SMTP server manually.

Lame ISPs
I only know one ISP lame enough to block outgoing connections to port 25 for their customers (Rogers). But there may be others. If you're having a problem establishing the following connection: try connecting to Seneca's SMTP server first. If that doesn't work: just skip this test.
File:AWSTelnet25.png

By default Postfix saves emails in the file /var/mail/username in the MBOX format. That means all the emails you get will be appended to this file. That works fine under normal circumstances but most people don't use MBOX for serious email servers. We'll configure Postfix to save messages in the Maildir format, under each user's home directory.

We'll use dovecot-lda as a LDA. It's an application that comes with the Dovecot package.

Sometimes you want to receive emails which are sent to different addressed. For example the system administrator typically receives emails sent to postmaster, webmaster, hostmaster, and root. Also dovecot-lda will not deliver email to root at all as a security measure.

Create an alias to deliver emails meant for root to andrew instead: