I built Firefox on Win32 using Visual Studio .NET 2005. It took me merely 45 minutes to cleanly build Mozilla (dynamic build), but literally the whole night to figure out a problem.

I hope this documentation will help those of you heroes who intend to make an attempt to build Firefox on a Windows XP operating system using Visual Student .NET 2005 as the compiler.

My copy of Mozilla Firefox is built on a system with the following hardware (and it took less than an hour - dynamic build):

Before I proceed with the Firefox build, the following tools are installed:

Note: Make 3.80 is no longer available in the Cygwin setup installer.

Here are the steps that I took to configure the environment for the Firefox build:

4.  After source is downloaded successfully, create a text file with the filename .mozconfig (filename should be exactly how it's spelt: .mozconfig) in the editor of your preference in C:\proj\mozilla

6.  Build the source in C:\proj\mozilla

The time it takes to build Firefox depends on your machine. It could take as little as 16 minutes or as long as 3 hours! Just be patient and a miracle will happen (unless the console spurts out error code - refer to my list of problems if you encounter any, hopefully it helps).

Your newly built monster, I mean, Firefox will be in C:\proj\mozilla\firefox-objdir\dist\bin. Double click on the executable file that looks like a minefield (and cross your fingers to hope that it wouldn't crash your system).

After glancing through the Mozilla Build Documentation, I only needed one word to describe how I felt, overwhelmed! I started by skimming through the text, and downloaded all the required tools, configured the environment, checked out the source before I started my build. I ran into the problem: The linker major version does not match the compiler suite version7

Without researching further on the problem, I consulted one of my classmates and he said that I had to re-install Visual Studio 2003. I was skeptical about his way of resolving this problem (and also it would be a hassle since I've uninstalled it a week before this build), so I looked into it further and found out from Mozillazine that the solution is to install Cygwin.

I tried a new clean build with David Humphrey's Guide to Building Firefox on Win32 using Visual Studio .NET 2005 (very concise and recommended for the heroes who want to build Firefox).

Problem: "To build the installer makensis is required in your path" error

The very first problem I encountered after I started to build took me merely a couple minutes to solve thanks to my great old friend Google. The command prompt spurted out this error message:

Solution: "To build the installer makensis is required in your path" error

I found my solution on a forum, Mozillazine. Basically I just added "ac_add_options --disable-installer" to my .mozconfig file.

The next problem I encountered was a little trickier. The error code was:

My typical solution to any problems is "consulting" my old friend Google. It seemed like quite a few people encountered the same problem. I found out from a forum that the problem was that I didn't have the right version of Make. I had Make 3.81 which should have been Make 3.80.

I pulled up the GNU Tools for Microsoft Windows (Cygwin) installation guide again, and realized that I have missed out the part where it mentioned make 3.80 (not 3.81!) -- dependency analyzer for software builds (Devel category) as one of the required packages. However, when I reinstalled Cygwin again, it didn't give me an option to choose Make 3.80!! Windows Build Documentation is updated - 17:15, Sept 16 2006 (EST)

I tried various solutions (hunted for an older version of Cygwin to install and linking Make 3.80 from Cygwin with ln -s command) but my build still failed. It was frustrating, because through most of the forums that discussed about this problem, it seemed like everyone didn't have a problem "rolling back to version 3.80". However, the version of Cygwin that I installed didn't have the older version of Make and I wasn't the only person experiencing that problem at that time. Both my classmate and I tried the various solutions as per my suggestions but they all failed. After several unsuccessful attempts, I consulted Sancus (Andrei Hajdukewycz) for a solution (which was easier than I thought), and the miracle happened, Firefox was then successfully built!! (Sheds a tear of joy..)

I also learned from Sancus that you can dump the Make package in your Cygwin packages temp directory and the installer will let you install it (I didn't actually try that). The mirrors don't seem to have properly set up setup.hint files to point to the old versions of the Make files.

I believe this error occurred because the Make build tool couldn't find the Perl package. 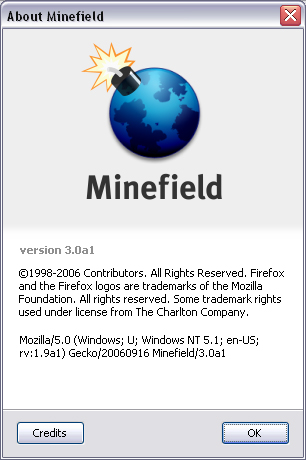 Helped me with placing Make 3.80 in Cygwin

Head start with the first attempt to build Firefox!

I wouldn't have successfully built without the following documentations:

If it wasn't for the following people, I wouldn't have my great Firefox built:

From my experience in building Mozilla Firefox, I have learned the value of working in a community. I wouldn't have successfully built one of the world's biggest projects hadn't I met Sancus in irc://irc.mozilla.org/#seneca who gave me some pointers. The Mozilla forums are definitely helpful too, especially when the postings and discussions regard to the same problem you're encountering. Not only have I made a friend, I've also successfully built one of the world's biggest projects and have stepped my foot in the Mozilla community. This experience is definitely an eye-opener.

You have to start somewhere. By starting means actually doing it! Don't be intimidated. It might seem overwhelming but there are resources to help you go through that phase. Don't ever think that contributing to Mozilla is out of your realm of ability. If there is a will, there is a way!

Don't outsmart anyone who tries to help you. Instead, just listen and consult a few people at the same time to compare which solution is most feasible. As the saying goes, you'll never learn if you don't fail. So maybe failing is sometimes a positive outlook to a problem! Contribute and transfer your knowledge by documenting what you went through with a problem and how you solved it. Making a contribution feels really good, trust me. Don't underestimate your ability, you'll never know till you try it!

And last of all give credits to those who contributed to your project (even if it is trivial)!

Thank you, time for some ice cream now!