The Chapel is an open-source language that still constantly updates. The latest version as of the creation of this project is 1.23.0 released on October 15, 2020.

There is currently no official support for The Chapel Programming Language in major known IDE like Visual Studio, which is a downside compared to other languages in terms of usability.

Select one of the following options to install The Chapel Programming Language.

Pre-packaged Chapel installations are available for:

Users can also try The Chapel online here, though the version is currently stuck on Chapel 1.20.

The variable declaration requires a type or initializer.

A procedure is like a function in C++ that can be used or called inside the program.

A class is a type of collection that collects variables, procedures and iterators. We use class keyword to declare a new class type and use new keyword to create its instance.

Records are similar to classes. Records doesn't support inheritance and virtual dispatch but it supports copy constructor and copy assignment. And record variables refer to a distinct memory.

Iterators are declared like procedure in Chapel. Unlike processes, iterators typically return a sequence of values.

We declared the yield statement inside the iterator bodies, it returns a value and suspends the execution.

There are two types of parallel iterator in Chapel:

follower iterator will take input and iterate over it; create opposite results in order.

begin: it creates a independent thread. Unable to confirm who will execute first.

cobeign: it creates a block of tasks. The main thread will continue until the statements inside are finished.

Sync and single are type qualifiers that end with $ when you declare it.

They have an associated state (full/empty); when you declare it with an initializing expression, the statement will be full; otherwise it is empty and the value of that variable is the default value of its type.

empty is the only state that you can write a value to it, and after writing it changes to full.

full is the only state that you can read the value from a variable; After reading, sync variable will change to empty and single variable doesn't change.

The built-in type locale is used to represent locales in Chapel. When a task is trying to access a variable within the same locale, the cost is less compared to accessing a variable from another locale.

numLocales: a built-in variable which returns the number of locales for the current program as an integer.

Here: a built-in variable which returns the locale value that the current task is running on. In Chapel, all programs begin execution from locale #0.

Each task will be responsible for a single iteration. Significant performance hit caused by creating, scheduling, and destroying each individual task which will outweigh the benefits of each task handling little computation. 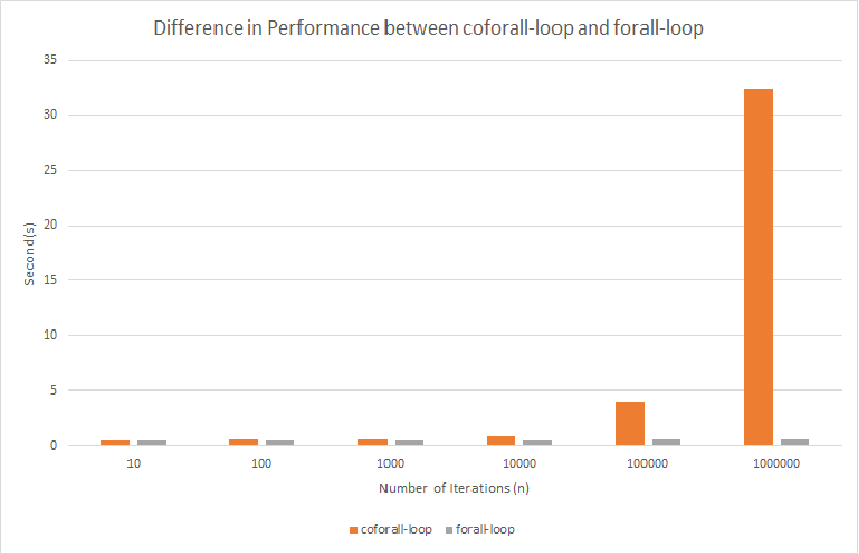 Timer: a timer is part of the time module which can be imported using the following statement:

sort(): used to sort the list in ascending order.

pop(index): used to pop the element at the specified index.

clear(): used to clear all elements from the list.

indexOf(value): used to retrieve the index of the value specified, returns -1 if not found.

insert(index, value): used to insert the value at the specified index.

Pros and Cons of Using The Chapel