OpenMP 4.0/4.5 introduced support for heterogeneous systems such as accelerators and GPUs. The purpose of this overview is to demonstrate OpenMP's device constructs used for offloading data and code from a host device (Multicore CPU) to a target's device environment (GPU/Accelerator). We will demonstrate how to manage the device's data environment, parallelism and work-sharing. Review how data is mapped from the host data environment to the device data environment, and attempt to use different compilers that support OpenMP offloading such as LLVM/Clang or GCC.

Difference of CPU and GPU for parallel applications

GPU is designed with thousands of processor cores running simultaneously and it enables massive parallelism where each of the cores is focused on making efficient calculations which are repetitive and highly-parallel computing tasks.  GPU was originally designed to create quick image rendering which is a specialized type of microprocessor. However, modern graphic processors are powerful enough to be used to accelerate calculations with a massive amount of data and others apart from image rendering.  GPUs can perform parallel operations on multiple sets of data, and able to complete more work at the same time compare to CPU by using Parallelism. Even with these abilities, GPU can never fully replace the CPU because cores are limited in processing power with the limited instruction set.

CPU  can work on a variety of different calculations, and it usually has less than 100 cores (8-24) which can also do parallel computing using its instruction pipelines and also cores. Each core is strong and processing power is significant. For this reason, the CPU core can execute a big instruction set, but not too many at a time. Compare to GPUs, CPUs are usually smarter and have large and wide instructions that manage every input and output of a computer.

What is the difference?

CPU can work on a variety of different calculations, while a GPU is best at focusing all the computing abilities on a specific task. Because the CPU is consisting of a few cores (up to 24) optimized for sequential serial processing. It is designed to maximize the performance of a single task within a job; however, it can do a variety of tasks.  On the other hand, GPU uses thousands of processor cores running simultaneously and it enables massive parallelism where each of the cores is focused on making efficient calculations which are repetitive and highly-paralleled architecture computing tasks. 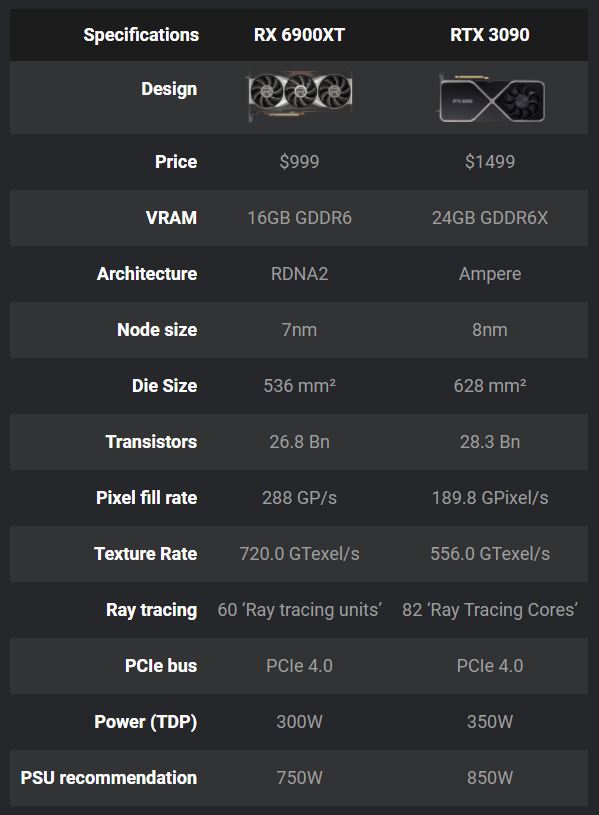 Means of parallelisation on GPUs

CUDA is a parallel computing platform and programming model developed by Nvidia for general computing on its own GPUs (graphics processing units). CUDA enables developers to speed up compute-intensive applications by harnessing the power of GPUs for the parallelizable part of the computation.

CUDA and NVIDIA GPUs have been improved together in past years. The combination of CUDA and Nvidia GPUs dominates several application areas, including deep learning, and is a foundation for some of the fastest computers in the world.

What is Heterogeneous-Computing Interface for Portability (HIP)? It’s a C++ dialect designed to ease conversion of Cuda applications to portable C++ code. It provides a C-style API and a C++ kernel language. The C++ interface can use templates and classes across the host/kernel boundary.

What is OpenCL ? It’s a framework for developing programs that can execute across a wide variety of heterogeneous platforms. AMD, Intel and Nvidia GPUs support version 1.2 of the specification, as do x86 CPUs and other devices (including FPGAs and DSPs). OpenCL provides a C run-time API and C99-based kernel language.

When to Use OpenCL: Use OpenCL when you have existing code in that language and when you need portability to multiple platforms and devices. It runs on Windows, Linux and Mac OS, as well as a wide variety of hardware platforms (described above).

OpenMP (Open MultiProcessing) OpenMP is a parallel programming model based on compiler directives which allows application developers to incrementally add parallelism to their application codes.

If no other construct is specified, for instance a construct to enable a parallelized region (#pragma omp parallel). By default, the code within the target region will execute sequentially. The target region does not express parallelism, it only expresses where the contained code is going to be executed on.

The map clause provides the ability to control a variable over a target region.

to - copies the data to the device on execution.

from - copies the data to the host on exit.

tofrom - copies the data to the device on execution and back on exit.

alloc - allocated an uninitialized copy on the device (without copying from the host environment).

If we have dynamically allocated data in the host region that we'd like to map to the target region. Then in the map clause we'll need to specify the number of elements that we'd like to copy over. Otherwise all the compiler would have is a pointer to some region in memory. As it would require the size of allocated memory that needs to be mapped over to the target device.

Parallelism on the GPU

GPUs contain many single stream multiprocessors (SM), each of which can run multiple threads within them.

OpenMP still allows us to use the traditional OpenMP constructs inside the target region to create and use threads on a device. However a parallel region executing inside a target region will only execute on one single stream multiprocessor (SM). So parallelization will work but will only be executed on one single stream multiprocessor (SM), leaving most of the cores on the GPU idle.

In order to provide parallelization within the GPU architectures there is an additional construct known as the teams construct, which creates multiple master threads on the device. 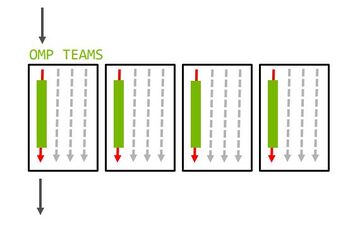 Each master thread can spawn a team of its own threads within a parallel region. But threads from different teams cannot synchronize with other threads outside of their own team. 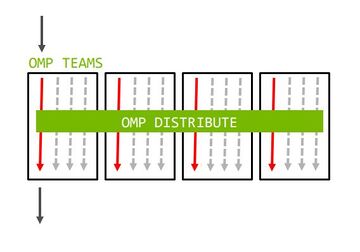 The distribute construct allows us to distribute iterations. This means if we offload a parallel loop to the device, we will be able to distribute the iterations of the loop across all of the created teams, and across the threads within the teams.

Similar to how the for construct works, but distribute assigns the iterations to different teams (single stream multiprocessors).

Calling functions within the scope of a target region.

Since Clang's OpenMP implementation for NVIDIA GPUs does not currently support multiple GPU architectures in a single binary, you must know the target GPU when compiling an OpenMP program.

Before building the compiler Clang/LLVM requires some software.

You will need the LLVM Core libraries, Clang and OpenMP. Enter these commands into the terminal to download the required tarballs.

Next step is to unpack the downloaded tarballs, using the following commands.

This will leave you with 3 directories called llvm-7.0.0.src, cfe-7.0.0.src, and openmp-7.0.0.src. Afterwards move these components into their directories so that they can be built together.

Lets begin to configure the build the compiler. For this project we will use CMake to build this project in a separate directory. Enter the following commands.

Next use CMake to generate the Makefiles which will be used for compilation.

After execution of the above statement the following should display towards the end of the output.

Now we need to rebuild the OpenMP runtime libraries with Clang.

Then configure the project with CMake using the Clang compiler built in the previous step:

Then build and install the OpenMP runtime libraries:

Using the compiler for offloading

The following steps leading up to this should now allow you to have a fully working Clang compiler with OpenMP support for offloading.

In order to use it you need to export some environment variables:

After you will be able to compile an OpenMP application and offload it to a target region by running the Clang compiler with some additional flags to ensure offloading.

How to set up compiler and target offloading for Linux on AMD GPU:

Note: user should be member of 'video' group; if this doesn't help, may add user to 'render' group

[AOMP https://github.com/ROCm-Developer-Tools/aomp] is an open source Clang/LLVM based compiler with added support for the OpenMP® API on Radeon™ GPUs.

AOMP will install to /usr/lib/aomp. The AOMP environment variable will automatically be set to the install location. This may require a new terminal to be launched to see the change.

Prerequisites AMD KFD Driver These commands are for supported Debian-based systems and target only the rock_dkms core component. More information can be found HERE.

Make sure to export your new AOMP to PATH

To see the name of your device for (-march=gfx803) you may run 'rocminfo' tool:

If further problems with compiling and running, try starting with examples: https://github.com/ROCm-Developer-Tools/aomp/tree/master/examples/openmp