This is my first experience in building such a big application. It took me a lot of time to do the research, I went to Google, went to ChatZilla, and went to blog, tried to get help. The following are my steps to build FireFox.

Here are the steps that I took to build Firefox under Windows with Visual Studio 2005.

Step 2: Install GNU Tools for Microsoft Windows (Cygwin) . Cywin is a Linux-like environment for Windows. It includes many utilities that are used to build firefox, such as gawk, perl, zip, and make.

Step 9: Build the Firefox from source.

Firstly, I thought I should have the source code in order to build the application. So I went to Mozilla website and tried to download the Firefox source code, and follow the steps that on this website, which is David’s instruction about how to build Firefox on windows with Visual Studio 2005.

But soon, I got stuck. The compiling process stopped after 10 minutes. The system displayed an error saying xxx.h file is not compatible. I put the error message in Google and tried to find the solution, but none of them worked for me.

Finally, I went to ChatZilla to get help, luckily I got Dave figure out my problem. After I talked to Dave, I found my steps were ok, but I shouldn’t download the source code. This source code that I downloaded won’t work under Visual Studio 2005.

Following Dave’s instruction on his website, I did step by step, it worked great. However, my system crashed after 30 minutes compiling. The Windows said out of memory, this is my problem that I had disabled virtual memory on Windows.

I enabled the virtual memory on Windows and reboot the system, after another 15 minutes compiling, the new Firefox is built.

This is the screen shot of new FireFox. 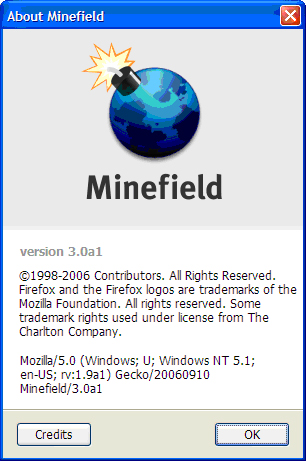 This is a great experience in learning how to build a big project and involving so many software and configuration. I learned knowledge and lessons from my problems that I encountered. The most important is, we can get any help, and also we can help each other in open source community.