Below is my attempt at "Building the Fox". I can't say that I understand (yet) what I did, all I know is that I did it.. I think.

In order to start the build process I had to install the following pieces of software:

After reading http://developer.mozilla.org/, and flipping through the build pages, I was completely overwhelmed. I started this course a week late, and already felt I had missed out on everything - I seriously thought I was in over my head. I started reading other student's Assignments to see if I could find a footing to start from, and then that's when I realized Dave had a build outline on his website. Starting from this, I took these steps: (to see Details of Problems, see Problem's Section)

1) After installing VS 2005 and Cygwin, I created the directory:

2) I downloaded the static moztools zip file and extracted it to:

3) I created the buildsetup.bat script, and used the settings in Dave's build (to be honest - I haven't the slightest what some of these do..):

4) I then ran the buildsetup.bat, and stumbled upon by first problem (Problem #1), how do I run the script?!

5) After figuring out how to run the buildsetup.bat script, I logged into Mozilla's CVS:

6) I checked out the build script:

7) I then created the .mozconfig file,

8) While in the same directory (c:\proj\mozilla), I then downloaded the full source:

9) After about 15 minutes of text flying through the screen, I crossed my fingers and began my build:

10) Unfortunately.. barely a minute had passed, and I had a build error (Problem #2). One of my directory names, my user directory, was my full name (Sara Minchella), taken from the windows user directory, and was causing havoc in my build process!

11)After fixing the problem, I began my build again, only to have another build error, I was missing the path to the makensis installer (Problem #3).

12) After fixing the problem (again), I attempted my build again.. only after 1.5 hours of building... I had a memory access error (DAMN YOU WINDOWS!!!), and my build died (Problem #4). Once again.. after starting the build process again (after cracking my head on the desk a few times), I finished the build successfully! 13) At least I think it build worked successfully, when I loaded firefox.exe, a few "errors" pop up, and I just clicked ignore, and the browser still pop up.. so I'm assuming it worked!

Seeing as I have never worked on a project of this size (Mozilla), I was (and still am!) completely overwhelmed. I didn't have the slightest idea where to start, even after reading http://developers.mozilla.org. I didn't realize a build could take almost 2 hours to complete, and be so involved! As an avid Windows user, I suppose I'm just used to the install wizards, and my software magically appearing! I'm eager to learn more about Mozilla development, and even more eager to get started on Assignment #2. The Mozilla community looks very large, but they're all so welcoming! 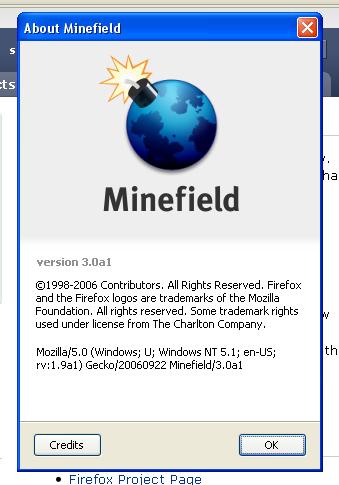