FSOSS, Free Software and Open Source Symposium, a place where open source community members can meet each other, make new connections, refresh old connections and express their different thoughts on the community. FSOSS has started only seven years before but it has made a huge impression on the open source community. People from various corner of the world came to attend the symposium and to deliver a speech in the symposium. By creating a separate track for “teaching open source”, this year FSOSS has initiated another branch in the open world. This track was a big success in which people discussed how we can teach open source projects to the students. The talk I enjoyed the most was Thunderbird community talk and Greg DeKoenigsberg’s community building talk. Thunderbird community talk was all about growing the community and making the community healthier. The talk also discussed about obstacles to the community and “Debian Effect.” The talk “Community Building and the Architecture of Participation” was full of enthusiasm and energy. The speaker, Greg DeKoenigsberg, was so impressive that he convinced me to believe, “Contributors are God to for the open source Communities.”

Title of this talk is pretty straight forward. As it is saying “Enabling healthy Open Source Communities: Case Study- Thunderbird” gives a hint that the talk is all about: how Thunderbird community works, how can somebody get into the community and what are the Thunderbird people are doing to grow the community.

For Discussing this ideas and thoughts Seneca has invited Mr. Dan Mosedale to talk about the Topic. Mr. Mosedale is a lead developer in Mozilla and devoted to Mozilla Corporation for years. He is also involved into Mozilla community building and development. In general, He is one of the valid spokesperson who can talk about the topic. His discussion mainly focuses on the ideas mentioned below:

First of all, he addressed that a person who want to be a part of the open source community requires two types of skills: coding and communication to spread community. Of course, coding is the major skill required to get into the community. The person requires a background of coding to write the code required to complete a certain task. The other skill is communication for spreading the open community. This skill contents inviting, caring and respecting. Inviting means a person should invite other developers to the community. Caring means the person should take care of newcomers in the community. The person should try to help as much as possible to the new comer in order to prevent the feeling of being left alone. This would boost up the confidence of the new comer and will generate a positive feeling of being part of the family.

Another topic was concerning about the obstacles for the community. Sometimes some people become noise for the community and decrease the efficiency of the community. What happens is, when someone discusses irrelevant topic in the community most of the people are disturbed and looses focus from the main goal. At the end it becomes counterproductive. To solve these kinds of problems few productive community members started private discussion where nobody can interfere. However, as they are open community members they posted their private talks on the blog to reach of everyone. In short, they made some private spaces where they can have technical and productive talk and at the end they published their talk. Another obstacle to the Thunderbird community is less documentation on building and developing. If somebody wanted to hack Firefox’s code, he can find enough documentation on https://developer.mozilla.org. But for Thunderbird it is very hard to find such documentations which prevent probable contributors from contributing to the community. Fortunately, there are free compilers available for building and developing Thunderbird project. These is really good considering some other open source communities which doesn`t provide the compilers and building the project becomes the major obstacle of all.

I enjoyed the talk when somebody asked that how many newcomers the Thunderbird community can handle at the moment? And the answer from Mr. Mosedale was 30-50. I was wondering why it is so less? Then Mr. Dan convinced me through his arguments. He stated that Thunderbird is not big community as much as Firefox or Fedora. It is so small compare to them. Thunderbird does not have enough technical support people to guide newcomers and writing code at the same time. Technical support people have to write the code, fix the bugs, enhance features and ship the product. In addition, they have to provide technical help to the newcomers. These require lots of efforts and tremendous amount of time. So, that is the reason they cannot afford so many newcomers at the moment.

Suddenly someone popped up the topic of Debian Effect. Debian is a free GNU/LINUX operating system distribution. The history says that Mr Ubuntu, a reach guy, employed expert members from Debian open source community and paid them to make another Linux distribution called “Ubuntu.” This event divided Debian community into two types of members: first who are volunteering for the community and the other who are getting paid to do the same thing. This situation created a number of conflicts. Few people who were volunteering did not want to go along with Debian community. And thus, some people left the community. In the talk, one man asked the question if Debian effect exist in Thunderbird community or not. However, Mr. Dan doesn’t think that Debian effect exist in the Thunderbird community at the moment. He thinks that everybody who is volunteering is not jealous of the people who are paid. Everyone is giving equal respect and help to other people without considering if the person gets paid or not. But, I think that is not the whole truth. There might be some people who are not behaving properly if the person is below their level, as nothing is idea in the world. We just need to focus that we must not become the people who are not behaving correct - ethically. I don’t think there is something else that we can do about the situation.

As one of their future goal they are planning to include art people into the community. The major reason to include them is to make the product more compatible to closed source projects. 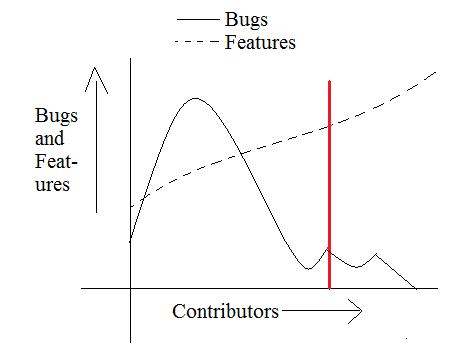