Difference between revisions of "Tutorial 1: Using Your Matrix Server Account"

While attending Seneca College, you will be using many different computer systems. Some of these servers include:

A shell is an interface / interpreter to allow a user to communicate with the Linux computer system.

Although you need to study concepts throughout this course, you will also need to learn to issue simple as well as more advanced Linux commands. This requires that you practice issuing Linux commands on a frequent basis to become more comfortable when working within the Unix and Linux command-line environments.

For this course, it is important to learn how to open a command prompt in order to issue commands to perform common tasks. In Unix/Linux, a shell is simply an interface / interpreter to allow a user to communicate with the Linux computer system (server). Linux shells have evolved (improved) over a period of time. You will be using the Bash Shell which is considered to be user-friendly. By understanding how to issue Linux commands, you can create a file consisting of Linux commands and programming techniques called a shell script (learned later in this course) to automate tasks to make you a more productive user and administrator.

Layout of the Matrix Server 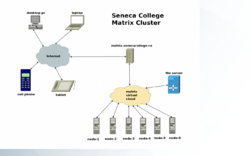 The Matrix server consists of several Virtual Computers all connected together to form a cluster. A cluster is a cost effective alternative to larger servers.

The Matrix server consists of several Virtual Computers connected together to form a cluster. A cluster is a cost effective alternative to buying larger servers.

All registered students in this course should have an account on the Matrix server. You will be using this account for the following reasons:

Connecting to the Seneca Global Portal

Seneca College are "rolling-out" additional measures to improve network security. One of these measures are to implement
multi-factored authentication.

Although this process will be "rolled-out" over time, the Matrix server is affected for the Fall 2020 semester and onward.

NOTE: If you haven't done this yet, please perform the steps provided in the following link:
https://inside.senecacollege.ca/its/services/vpn/

In the next investigation, you will learn how to connect to and login to your Matrix server account from a remote computer
such as your home desktop computer or your laptop computer.

After connecting to the Seneca Global Portal, you can open a terminal in your Newer Windows 10, Mac or Linux computer and issue the following command:

You can also click on the following link to download and install a graphical SSH application for your Windows machine:
http://www.sfsu.edu/ftp/win/ssh/SSHSecureShellClient-3.2.9.exe

You need to run an application called SSH in order to securely connect to your Matrix Linux account where you will learn to work in the Linux environment.


In this investigation, you will learn how to connect and login to your Matrix account by issuing a command from your computer's text-based terminal or downloading, installing a running a Windows SSH graphical application.


CONNECTING TO YOUR MATRIX ACCOUNT FROM A GRAPHICAL APPLICATION

SSH Settings Dialog Box
We will now show you how to configure your SSH Secure Shell Client, but the other applications can allow you to configure their settings.

In the next investigation, you will learn how to issue Linux commands and how to setup and perform the first two sections of the online ULI101 assignment #1.

In this section, you will learn how to use the Linux Shell. Topics in the section include:

The Bash shell in Matrix allows you to interact with your Matrix account by issuing commands.

An argument can be a pathname, text, option, etc.

An argument is separated from a command (or from other arguments) by a SPACE, multiple spaces or a TAB.

Getting Help with Linux Commands

With the Linux OS containing over 2500 commands and utilities, it is good for a Linux user or sysadmin to learn about how to use commands “on-the-fly”.

The man command can provide information on how to use a command (i.e. usage, arguments, options, examples).
The commands are classified into sections or volumes.

Learning shortcut keys in any OS terminal will allow you to be more productive as a sysadmin. You will focus on learning a few common Bash Shell keyboard shortcut keys and learn where you can access online help for additional shortcuts (if required).