Data (treated as singular, plural, or as a mass noun) is any sequence of one or more symbols given meaning by specific act(s) of interpretation. Digital data is data that is represented using the binary number system of ones (1) and zeros (0), as opposed to analog representation.
Reference: https://en.wikipedia.org/wiki/Data_(computing)

Therefore, computers process and store information in a binary number system consisting of 0s and 1s. For many aspects of programming and networking, the details of data representation must be understood.

In terms of this course, we will learn how a simple decimal number (integer) is stored into the computer system as a binary number. We will also learn other numbering systems (octal and hexadecimal) that can be used as a "short-cut" to represent binary numbers.

The decimal numbering system is a numbering system where each digit can be represented by numbers 0 - 9. The reason for this system may be attributed to the fact that humans were used to counting on their fingers and thumbs.

The numbering system is based on sums of the power of 10. 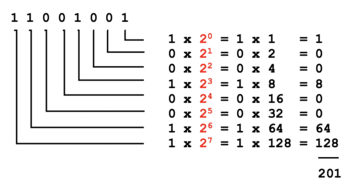 Performing a binary to decimal conversion.


NOTE: To convert other numbering system to decimal, replace the number 2
(in red in the diagram to the right) with 8 (for octal) or 16 (for hexadecimal). 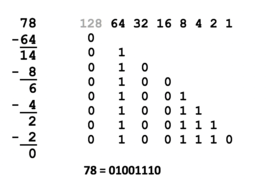 Performing a decimal to binary conversion.

The purpose of this section is to obtain extra practice to help with your assignment #1, quizzes, your midterm, and your final ezam.

When answering Linux command questions on this side or the back side of this page, refer to the following Inverted Tree diagram. The uli101 directory is contained in your home directory. Assume that you just logged into your Matrix account. Directories are underlined. 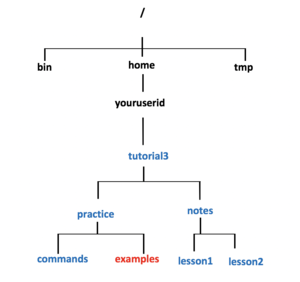