Once upon a time there was a team. In their programs, they never used floats. They only used double doubles.

Rust is a system programming language (like C and C++, offering direct access to physical memory) sponsored by Mozilla, created in 2010. It is compiled, imperative, functional and strongly typed; it aims to provide better memory safety and still maintain a performance similar to C++, while providing garbage collection through reference counting. Rust won the first place as the "most loved programming language" in 2016 and 2017, in a survey from Stack Overflow 1 2.

Rust has a very strong emphasis in security, more specifically, memory safety. Because of this, the same rules that the compiler requires from a program end up solving many problems that are common in concurrent executions, such as race conditions. This project will explain what these security rules are, how they can prevent problems in parallel programming, as well as demonstrating the correct way to tackle concurrency with Rust.

Rust has a very peculiar way to deal with memory deallocation, security, and ownership. Understanding how memory management works is essential in order to understand how to use parallel programming in Rust. Consider the following example, where we create a vector, push some elements into it, and then print the elements:

Notice how variables in Rust are immutable (constant) by default - we need to manually specify that the vector can be changed. Failing to do so will result in a compilation error.

In the next example, we abstracted the "push" method to a function called "add_to_vec", which takes a vector and a number, and pushes the number into the vector:

In a language like C++, a vector passed like this would be copied to the function and modified, leaving the original vector untouched; in a language like Java, a similar logic would work, since objects are passed by reference by default. Rust, on the other hand, has a different approach: sending the vector to a function like this means transferring the ownership of the object completely to that function. This means that after the vector is sent to a function, it is not available to the main function anymore - once the add_to_vec function ends, the vector will then be deallocated, and the next *for* loop will fail.

If we try compiling this code, the compiler will produce an error:

To fix this, we will have to transfer the ownership of the vector back to the main function. We do this by returning the vector back and reassigning it to the variable vec:

Now the output is the expected:

An easier way to deal with memory ownership is by lending/borrowing memory instead of completely transferring control over it. This is called memory borrowing. To borrow a value, we use the & operator:

This will also produce the correct output. In this case, we don't need to send the ownership of the vector back, because it was never transferred, only borrowed. There is one important detail: mutable references (&mut T) are only allowed to exist if no other mutable references to that value are active. In other words: only one mutable reference to a value may exist at a time.

From what was presented above, some problems can be identified when applying parallelism:

These two factors limit the capability of conventional shared memory. For example, the following code would not compile:

Although this seems unnecessarily strict, it has a great advantage: race conditions are impossible - they are checked at compile time, which means that the systems will be safer and less likely to present concurrency problems. To correctly use parallel programming in Rust, we can make use of tools such as Channels, Locks (Mutex), and Atomic pointers.

Instead of sharing memory, Rust encourages communication between thread in order to combine information. Channels, which are available in Rust's standard library, can be pictured as rivers: an object put into this river will be carried downstream. Likewise, a Channel has two parts: a sender and a receiver. The sender is responsible for putting information in the channel, which can be retrieved by the receiver. When we ask for a receiver to get a message from the channel, the execution may wait until the message is received or not: the method recv will block the execution, while try_recv will not.

The following example will spawn a thread, which will send a few strings down a channel which will be received by the main thread.

This produces the following output:

Similarly to the previous examples, the sender will be moved to the closure executed by the thread, which means that it will go out of scope when the thread finishes. To distribute the sender through several threads, they can be cloned: objects sent through this sender will still be received by the same receiver, but the two senders are different objects, which can have their ownership moved:

Rust language also supports shared-state concurrency which allows two or more processes have some shared state (data) between them they can write to and read from. Sharing data between multiple threads can get pretty complicated since it introduces the strong hazard of race conditions. Imagine a situation when one thread grabs some data and attempts to change it, while another thread is starting to read the same value, there’s no way to predict if latter one retrieves updated data or if it gets hold of the old value. Thus shared-state concurrency has to deliver some implementation of guard and synchronized access mechanism.

The access to shared state (critical section) and synchronization methods are typically implemented through ‘mutex’. Mutual exclusion principles (mutex) provide ways to prevent race conditions by only allowing one thread to reach out some data at any given time. If one thread wants to read/write some piece of data, it must first give a signal and then, once permitted, acquire the mutex’s lock. The lock is a special data structure that can keep track of who currently has exclusive access to the data. You can think of locks as dedicated mechanism that guards critical section.

Since Rust Lang supports ownership principles, the threads are inaccessible to each other automatically and only one thread can access data at any given time time.

The snippet below demonstrates how you can create and access mutex in rustlang:

Mutex construct is generic and it accepts the piece of shared data protected by the lock. It is important to remember that the ownership of that data is transferred into the mutex structure at its creation.

The lock function will attempt to acquire the lock by blocking the local thread until it is available to obtain the mutex. The data is automatically unlocked once the return value of lock() function gets released (at the end of the function scope) so there is no need to release the mutex lock manually.

In Rust, some data types are defined as “thread safe” while others are not. For example, Rc<T> type, which is Rust’s own implementation of “smart pointer”, is considered to be unsafe to share across threads. This type keeps track of number of references and increments/decrements count each time a new reference is created or old one gets destroyed. Rc<T> does not enforce any mechanisms that makes sure that changes to the reference counter value can’t be interrupted by another thread. The snippet below demonstrates the issue an results in compiler error:

This will produce an error :

Luckily for us, Rust ships another thread-safe implementation of ‘smart pointer’ called Arc<T> which implements reference counting via atomic operations. It is important to note that in serial code, it makes much more sense to use standard Rc<T> over Arc<T> type since the latter structure is more expensive performance-wise.

This will produce the expected result :

This time the code worked. This example was very simple and not too impressive. Much more complicated algorithms can be implemented with the Mutex<T>.

Rust lang users and community are heavily involved in development of language extensions. Although core features offer quite a bit of programming tools on their own, there is still a demand for more complex functionality with a higher-level API. Rust has its own package registry that stores various libraries that can satisfy programmers needs. These packages vary from networking tools, web services to image processing and multi-threading libraries. One package can be of particular interest to parallel programming enthusiasts – it is a data-parallelism library called Rayon. The package is praised to be extremely lightweight and it makes it easy to convert a sequential computation into a parallel one. It also abstracts some Rust-lang threading boilerplate code and makes coding parallel tasks a bit more fun. Just like TBB, it can be used with iterators, where iterator chains are executed in parallel. It also supports join model and provides ways to convert recursive, divide-and-conquer style problems into parallel implementations.

Parallel iterators are implemented with a more primitive method called join which takes 2 closures and runs them in parallel. The code snippet below demonstrates quick sort algorithm:

Rayon borrowed work stealing concepts from Cilk project. The library attempts to dynamically ascertain how much multi-threading resources are available. The idea is very simple: there is always a pool of worker threads available, waiting for some work to do. When you call join the first time, we shift over into that pool of threads. 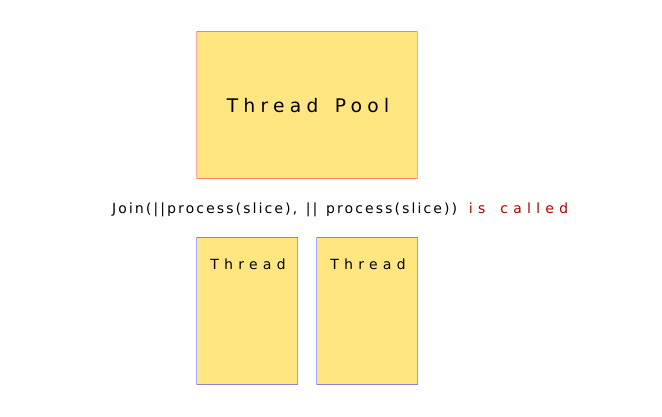 But if you call join(a, b) from a worker thread W, then W will place b into its work queue, advertising that this is work that other worker threads might help out with. W will then start executing a. While W is busy with a, other threads might come along and take b from its queue. That is called stealing b. 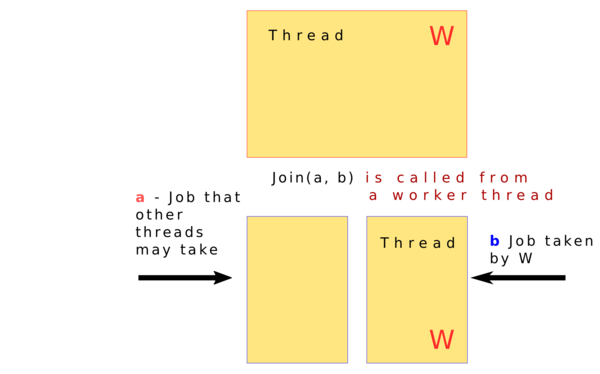 Once a is done, W checks whether b was stolen by another thread and, if not, executes b itself. If W runs out of jobs in its own queue, it will look through the other threads' queues and try to steal work from them. 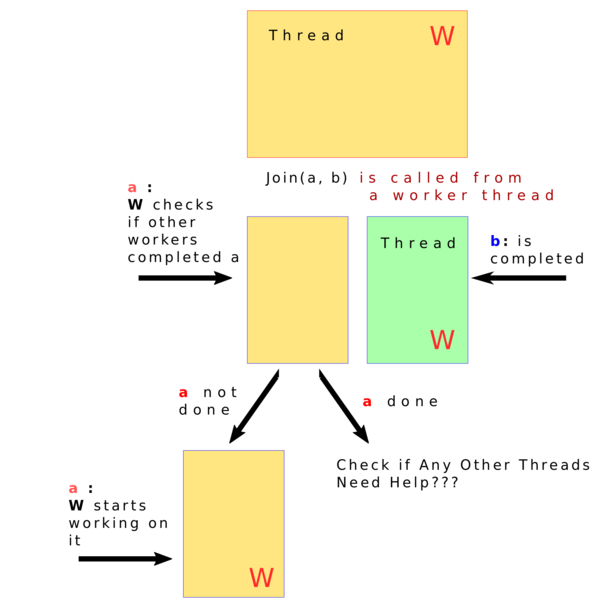