This project aims to turn the DXR into an extension that can be installed in Firefox or distributed as a XUL/Prism application. This will allow developers with limited or no internet connection to access the Mozilla source code and documentation in an offline environment. The extension will also provide a low-bandwidth solution for applying updates on a timed interval or at the user's command.

The DXR is a compilation of Mozilla developer documentation. The plan is for this material to be distributed on a Fedora Live DVD that will allow the user to access these materials offline or, alternatively, install them for use on a Windows machine.

Currently the Local MXR and MDRK exist as web applications that run only on Fedora and require the installation of MySQL, Perl and apache. These projects have to be setup manually and are not installable. Our part in this project would be to convert these projects so that they can be installed cross-platform as a Mozilla Firefox extension.

About The Source Code 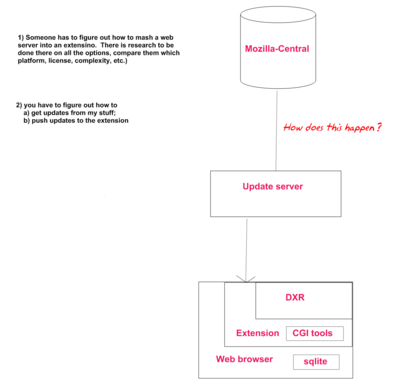 Mozilla-Central is the main repository for Mozilla source code. This is the raw fodder out of which documentation will be created. How it is created doesn't really appear on our diagram unless you count the "How does this happen?" note.

Well, how it happens is through a static analysis tool called Dehydra. In layman's terms, Dehydra reads the Mozilla source code and annotates it in a way that can be turned into documentation in an automated fashion. This part is another project entirely and as it relates to our project, the relevant work is being done by David Humphrey. However, our team will need to setup the Dehyra tool to feed our update server.

Although this project is all about building a tool for browsing documentation off-line, that documentation is in a constant state of flux. It would be useful to be able to refresh it when need be. The update server needn't be terribly complex. A simple Apache server and some CGI work should suffice.

However, it needs to be worked out exactly what kind of update is being pushed. Is it a binary diff of the sqlite database? And if so, will it need to keep a collection of diffs based on a original dataset in order to service users who haven't sync'd for some time. There's also the question of whether the update mechanism build into Mozilla for extensions is useful to us. We need to do some research on how extension updates work.

The application front-end holder. It provides a way for the application to be accessed. It is not limited to Firefox web browser only, it can also be run as a Prism application.

Portable DXR (our browsable source code documentation) is an application that lives inside our extension. The CGI tools exist as part of an embeddable web server. When you remove the DXR part, what you are left with is the platform on which it runs. It's also worth pointing out that the SQLite support is available in two ways. Local storage capabilities using SQLite are build into Mozilla applications and can be accessed by an extension using C++, JavaScript, Python. However, SQLite database files can be accessed by any software that understands the format, so SQLite support will also be available through the cgi tools. The DXR application will probably use the CGI tools to access SQLite files if our presentation layer is traditional XHTML. But if we decide to use XUL, we can use the browser's built in functionality directly from JavaScript. In either case, I suspect we will end up leveraging the built in sqlite support for the updates. But we need to do some research on that.

The presentation. The front-end is mostly implemented by David Humphrey on his DXR. We need to modify the UI to implement the following functionalities:

Project is on hiatus from Jan 2009. It may restart in May 2009 or September 2009 depending on the schedule of the contributors.

Oct 2, 2008: Discussion with David Humphrey about technical details of DXR.

Oct 29, 2008: Further discussions with David Humphrey about documenting the project.