In the last lab we created the ww instance:

Before you get started with the storage configuration, install httpd using yum on ww. You don't need to start the service at this point. Just install it.

Storage for the web server

In this lab we'll configure ww to function as a web server. The most important piece of learning in this lab is managing one type of storage available on AWS: Elastic Block Storage (EBS).

An EBS volume looks like any other block storage device (e.g. a harddrive partition) to an operating system in an AWS instance. But of course it's not a partition or a harddrive or an LVM logical volume, its actual implementation details are internal to AWS and of no concern to us, the users. The concept should be familiar to you because it's so similar to how in OPS245 you've created a virtual harddrive in VMware and attached it to an existing VM. 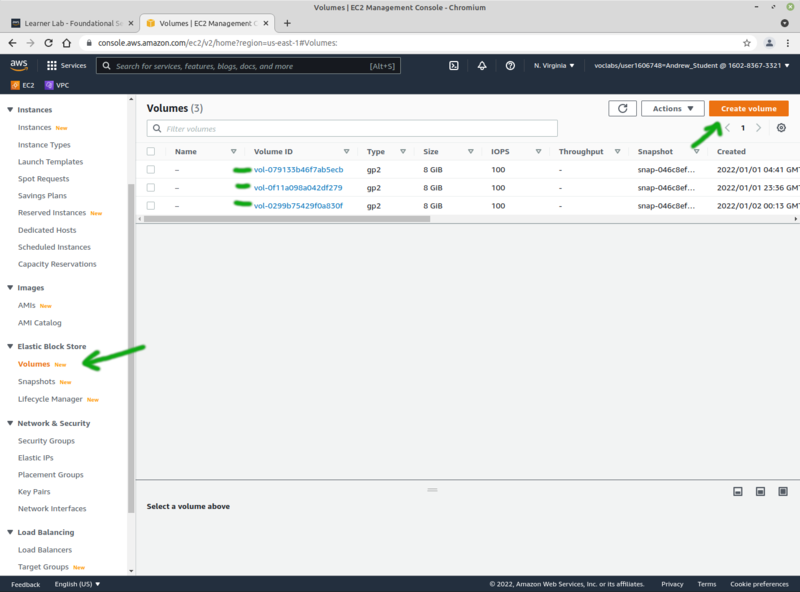 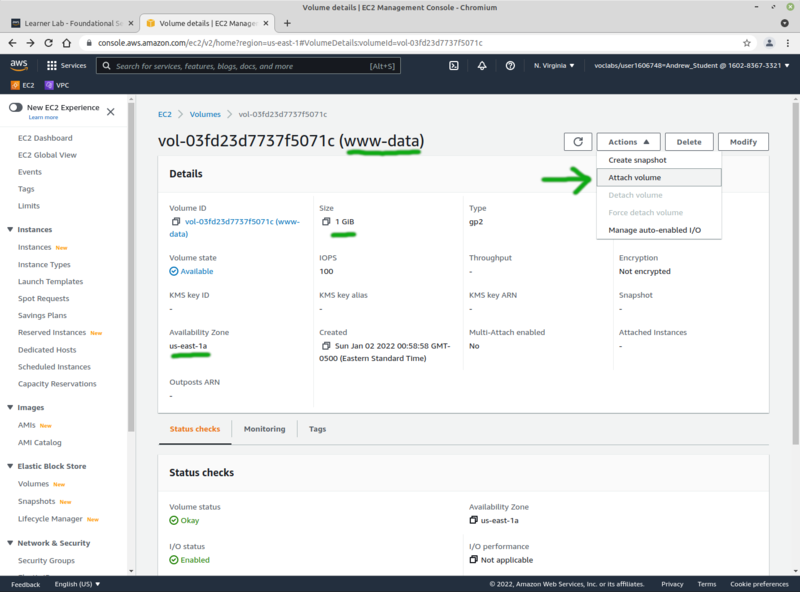 The name of the device doesn't really matter. Mine turned out to be /dev/sdf.

Note that you don't need to shut down your VM nor even reboot it. The action you performed is the equivalent of plugging in a hot-pluggable storage device into a Linux desktop or laptop. 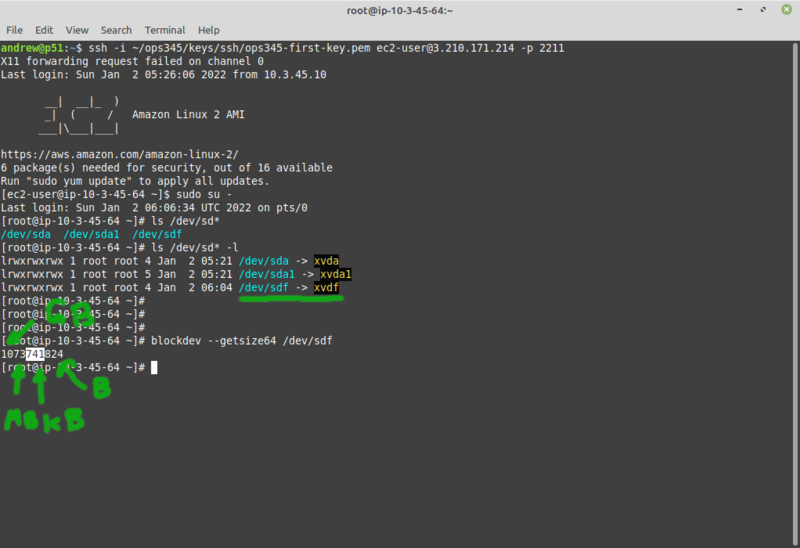 At this point you have a new block storage device of 1GB plugged into your box, but it is not currenty being used. Hopefully you paid attention in the OPS245 LVM labs because this is the same stuff, just in the cloud instead of a local hypervisor.

Use your new EBS device as a LV

It should not be difficult to imagine that your web server might run out of storage space if it only has 1GB available. How much work would it be to recreate the entire machine, reconfigure it, move all the files over, and do that without too much downtime?

In order to avoid all those problems you use LVM. The storage for your web server will be on a Logical Volume, on a separate EBS device than the operating system. If you run out of space: all you have to do is add another EBS device, and extend the logical volume to use the space on that new device as well. Exactly like you did in OPS245. 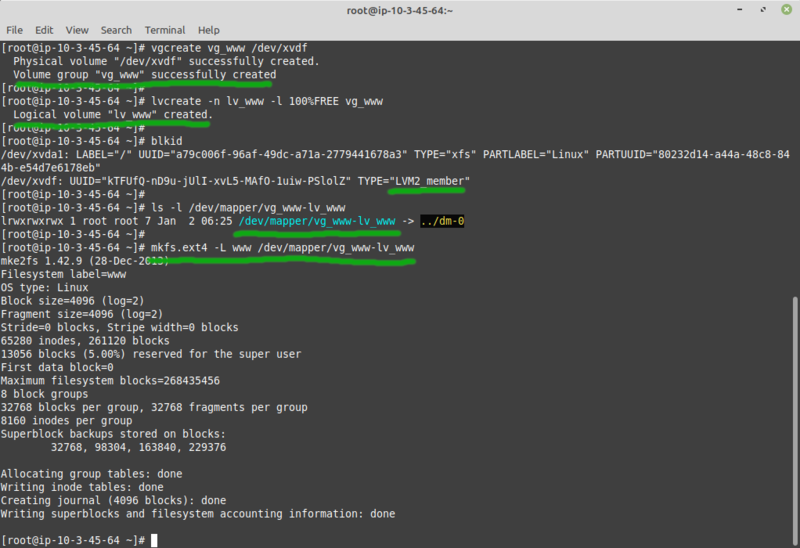 Mount your new LV on /var/www

Don't reboot the machine if the following testing fails. You might end up with an unbootable VM, and you'll have to restart from the end of the previous lab.

Now that you have a web server set up with proper storage, it's almost time to test it using a web browser.

Note that this is a webpage, and it's loaded from localhost which means the web server works, but it's not the webpage you created (you can quit links with the 'q' key): 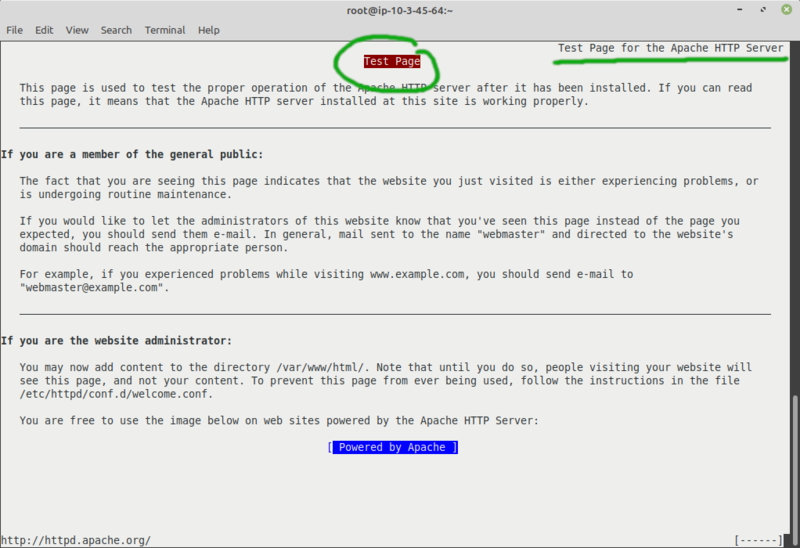 The problem is that we created an index.php file which will load by default if your web server has the PHP module installed, but we didn't install that. 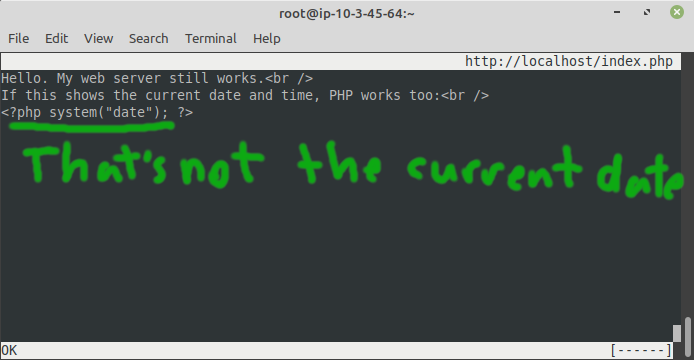 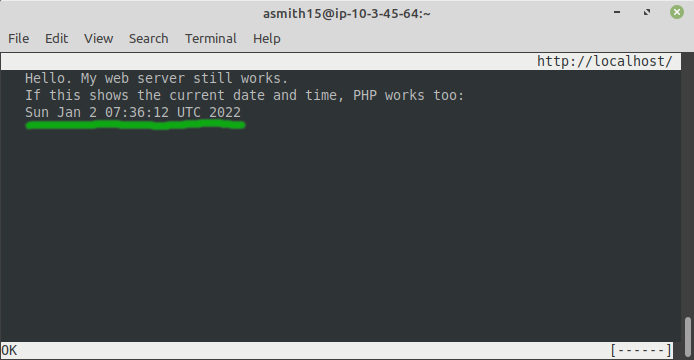 The links application is useful for basic testing but it's not how you want people to access your websites. You want them to use a proper web browser like Firefox. But in order for that to work: your web server needs to be accessible from the internet, so let's make it accessible via your router's IP address, using port forwarding (same idea as your SSH setup, but for port 80).

Remember that there are also security groups with rules that block access to ports. 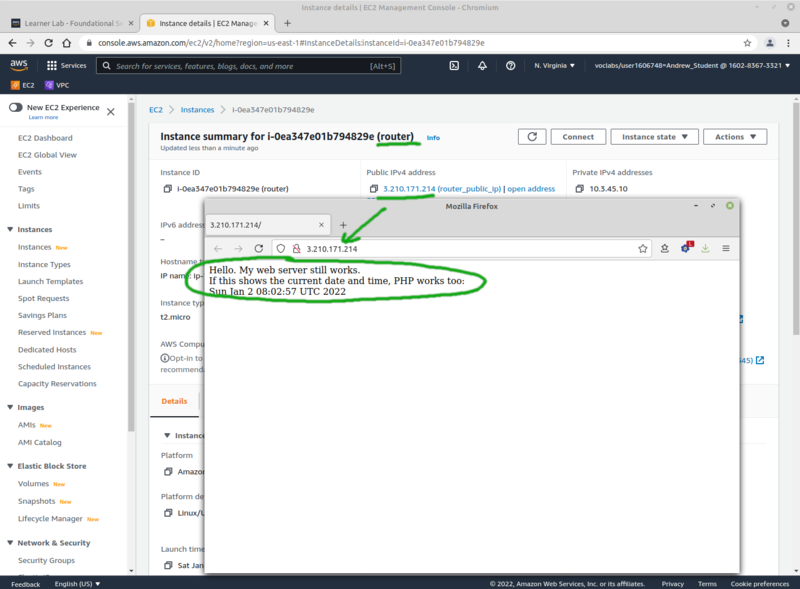 OPS345 is not a web development course, but you should learn a couple of basic things about websites. 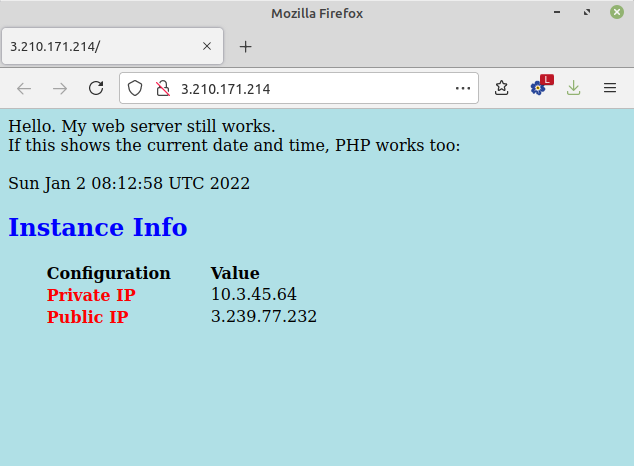 Since your web server is accessible from anywhere on the internet - there's really no reason why it should have a public IP at all. This will be an opportunity for you to learn to plan in advance as much as you can. 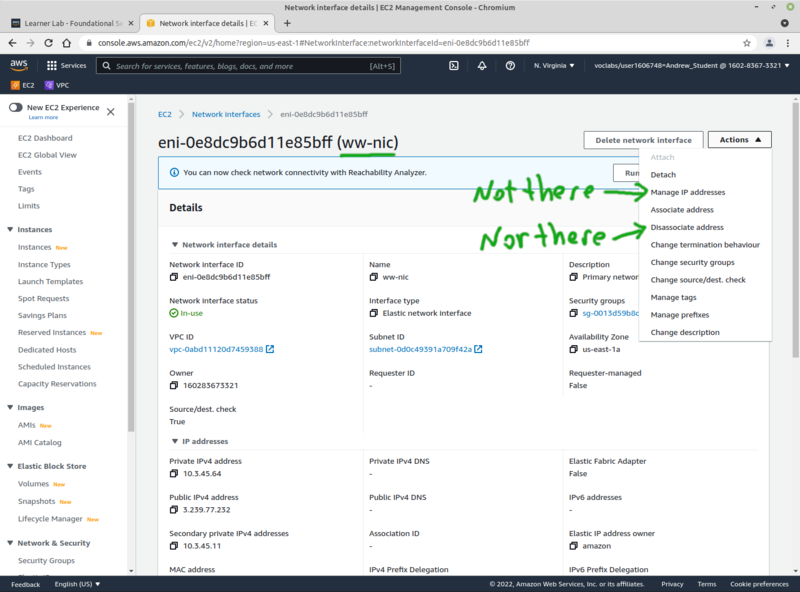 Strangely the option to remove a public IP from an instance which was intitially configured to have a public IP assigned automatically doesn't exist. Perhaps it will be added in the future (AWS does add features all the time), but at this time you just can't do it.

That means we'll have to rebuild the ww VM. That's why we called it ww instead of www. Don't get annoyed, keep these two things in mind: 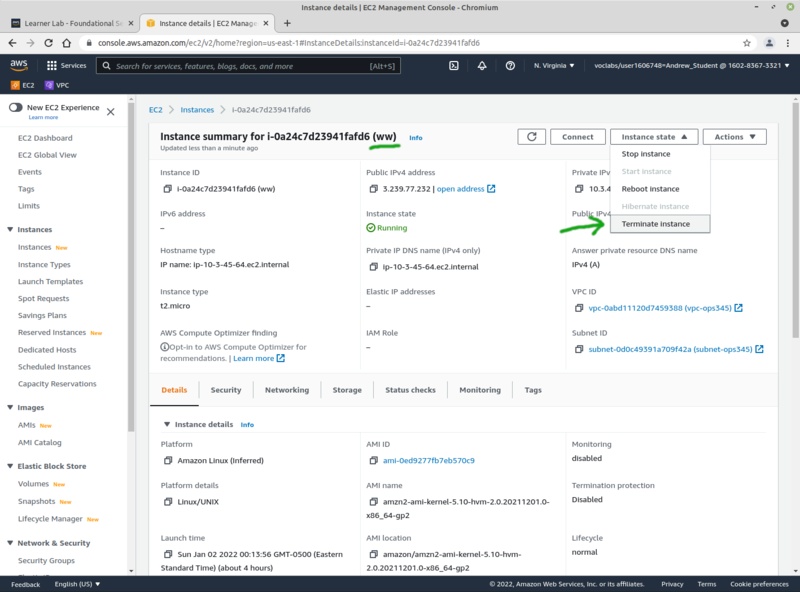 The VM will be shut down and then deleted. But not immediately. It will still show up in the list for some time, with the state "Terminated". Eventually it will dissapear without any further action from you.

When you delete an instance on AWS: the virtual disk used by that instance will also be deleted. But any extra EBS devices you added to it will not be deleted automatically. That's going to be very useful in this case. After you terminate ww: go to Elastic Block Store, Volumes and note that www-data is still there. 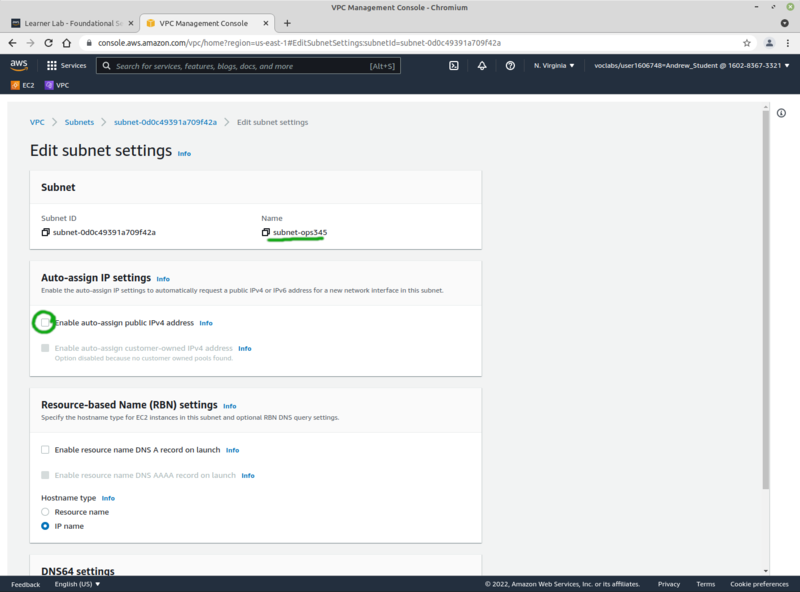 After the machine starts you can SSH to it exactly as you SSHed to ww (via port 2211 on router).

To install software you'll be in a bit of a bind because yum downloads software from online repositories and www doesn't have internet access.

All the data you created on the logical volume is still there but your fstab modifications are gone.

Disasociate the public ip from www 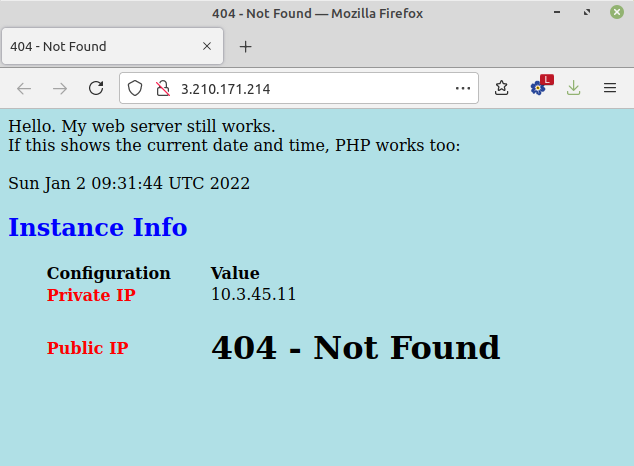