The fundamentals you've learned about networking in your previous courses apply to AWS as well. The only difference from what you may be used to is that most of it is virtual in AWS. There are obviously still wires and cables and switches and routers, but their infrastructure has a layer of software on top to allow it to be more dynamic to deploy, configure, and use.

This diagram is a very simple overview of the parts of AWS networking you're going to use in this course: 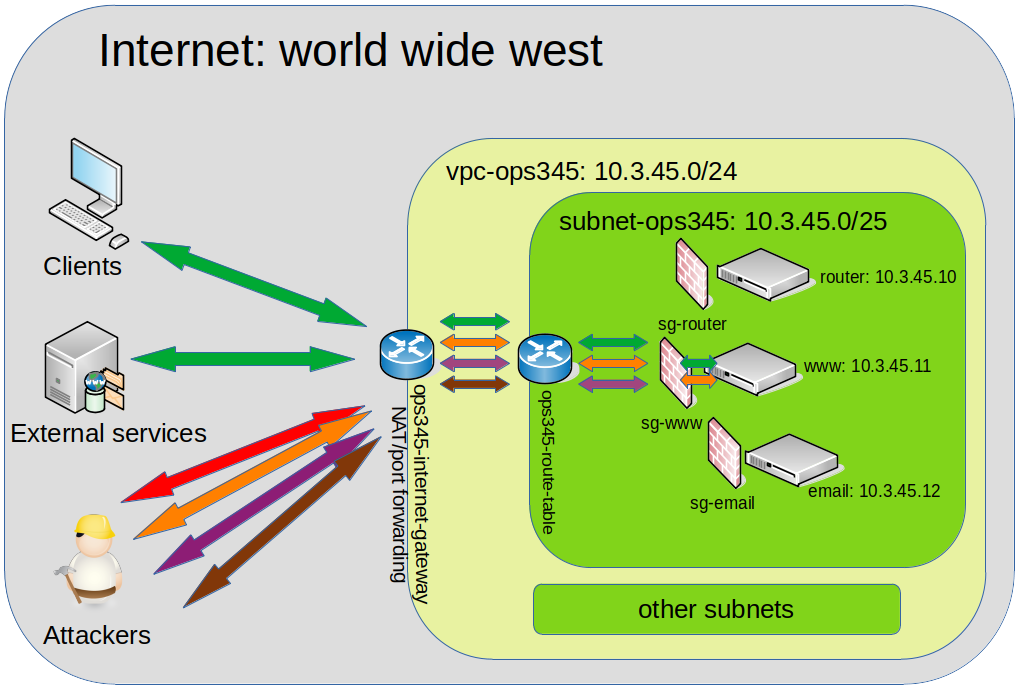 You're working on the real inetnet now! In many previous courses you were working in VMs on your virtual machines, on private networks, where attackers couldn't get to your servers even if they were super-dedicated and qualified. That is not the case in this course. Now an attacker doesn't even need to know who you are and they can take over your server.

The VMs and networks you create in this course are likely to be accessible by anyone on the planet. That means you have to think of security.

If you imagine that noone will attack your servers because you have nothing worth attacking: you're wrong. Every CPU connected to the internet is worth something. A most common scenario is an attacker (or organisation) finds a great number of vulnerable servers online, and make those part of a bot net. Then they will use the bot net they created (effectively a supercomputer) to launch attacks on targets that matter to them. They won't spend the time to attack your servers individually, but they have automation that exploits the most common security holes that lazy administrators leave open.

This is not a security course, but you should be able to understand that different parts of your system are susceptible to different types of attacks. The more components you configure with security in mind: the less likely you are to become a victim of an attack.

The general idea of cloud is that your servers and services are not physically located on the premises of your business, but somewhere else. Typically wherever you can rent cheaper computers. Cloud providers have the advantage of economies of scale and the great flexibility of resource assignment. When you're not using some component: someone else will pay to use it. So hardware isn't sitting idle getting old and wasting electricity.

VPC stands for Virtual Private Cloud. That means the resources you're using are not dedicated to you, but they are separated from other users by software configuration. For all but the most high-value targets that's secure enough.

Inside your private cloud you can have networks, file storage, compute (processing VMs), databases, etc.

Access to your resources from the outside is available through an Internet Gateway, which does port forwarding. It is used even if your VMs have public IP addresses. That is done in order to simplify securing your resources.

If your software uses any resources from outside your AWS VPC: those will also connect via the Internet Gateway.

Your machines on your subnets can automatically connect to each other. They do not have access to the internet automatically.

AWS automatically assigns a public IP to oyur VMs from its pool of addresses. These are dynamic. Every time you shut down your VM and turn it back on: it will get a new public IP.

Note if you look inside a VM: the public IP isn't actually configured as the IP on that interface. The IP is assigned to your VPC, and incoming connections to it are port-forwarded to the VM which you assigned the IP to. This is very different from what you saw in your previous courses. 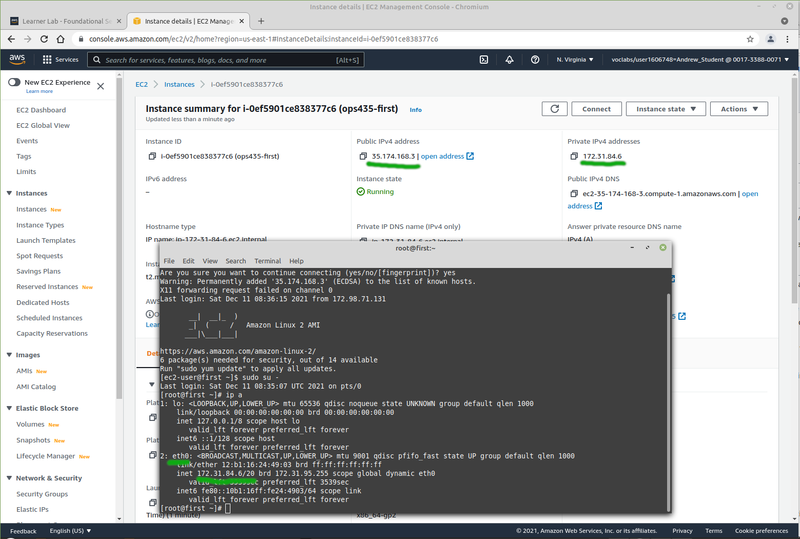 You may have configured port forwarding on your router at home at some point to enable some game or service which requires an open port on your public IP address. This is the same idea. On AWS this port forwarding is done via the Internet Gateway.

Private IPs don't cost any money, so they are static by default. AWS has a DHCP system where you can reserve a static address from your private pool for your VM. If you do: the VM will automatically get that static IP from an AWS-configured DHCP server. If you don't: the VM will get an unused IP from the same subnet, and will continue using that dynamically-assigned address even after it reboots.

You can also assign a static public IP to one of your VMs. You could use your own but since you don't own any: your only option here is to use an Elastic IP. This comes from the same pool of addresses as the dynamic AWS public IPs.

Interestingly Elastic IPs are free when you use them, but cost money if you don't use them. That's because there's a limited pool of public IPv4 addresses, and once you request one of these addresses: noone else can use it. So you better use it, or pay for keeping it from other users. Since our VMs are going to be shut down most of the time: this is one of the costs that will come out of your 100$ credit.

You need lots of practice to get used to these concepts. It's not enough to just read about them. 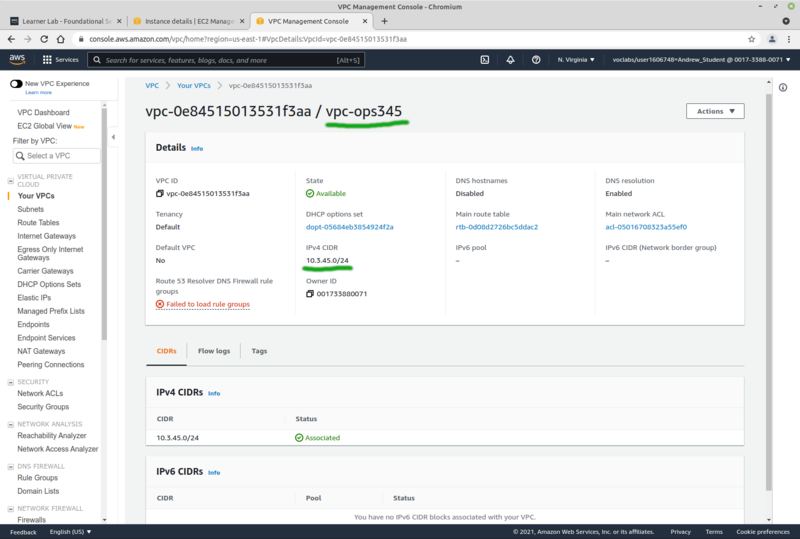 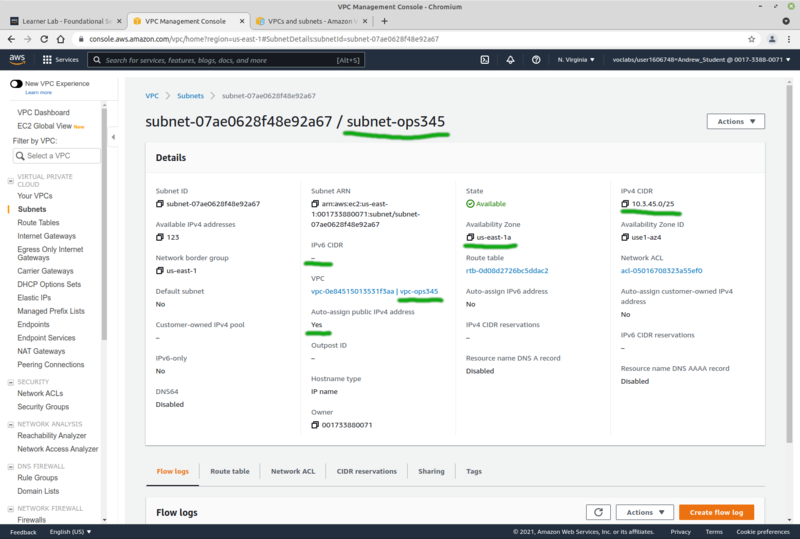 The machines in your private subnet won't have internet access, even if they have public IP addresses. An internet gateway is required. 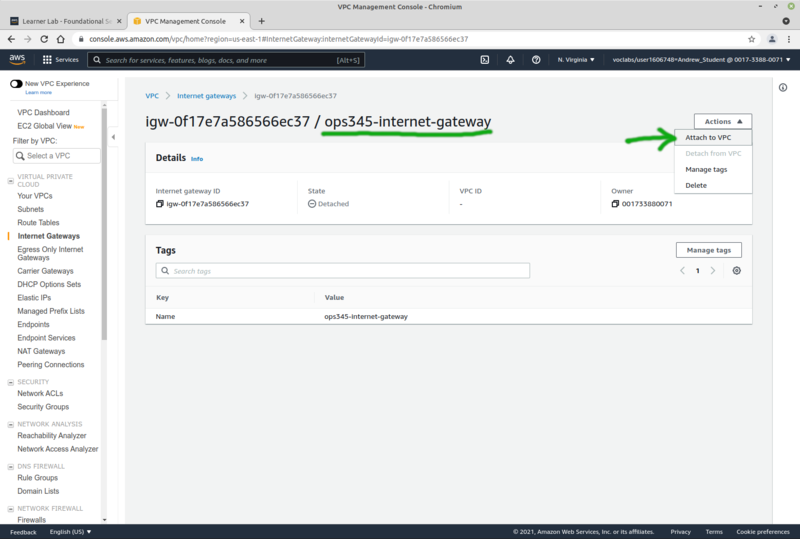 Finally: create a route table to connect your subnet to your VPC's internet gateway. We could modify the existing one, but we'll make a new one instead. 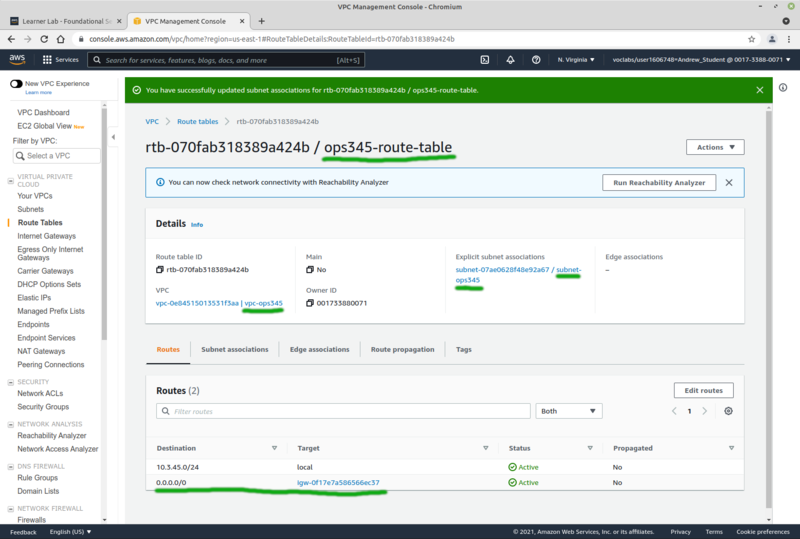 We'll make a VM named router. It won't do much routing, but it will give us more practice with basics.

If your SSH session locks
While you're messing with the network configuration of your VMs: existing SSH sessions may freeze, to the point that you can't even quit in order to reconnect. If this happens to you: use the key combination Enter+~+. to break out of the connection.

Your network environment is now done, but before you create your next VM: make a security group for it. Just like you did in the previous lab. 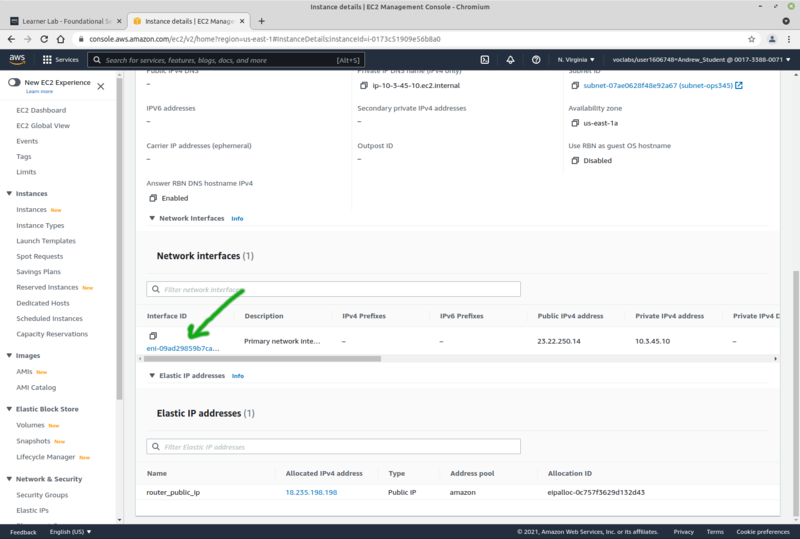 Firewalls are a very important but often overrated means of securing network resources. They're basic function is to prevent access to network ports or protocols no matter how the server software is configured. For example you can have a web server that listens on port 80 from any source, but you might configure a firewall to only allow access to port 80 from a specific subnet.

Some firewalls have extra features as well. For example iptables is also capable of providing port forwarding functionality.

A firewall alone is not enough to secure a server!
It will prevent many types of attacks, but it will be completely useless against many other types of attacks. A firewall is only one tool in an administrator's security toolbox.

One basic component in an AWS VPC is a Security Group. It's very similar to iptables in that it is a list of rules for incoming and outgoing traffic. You create a security group and assign it to an instance. There are some differences from iptables though:

iptables-services is not installed by default on Amazon Linux, but it is available in the repositories. We're going to use it on the router to provide port forwarding for SSH access to all your AWS VMs.

We'll set up a temporary instance for this lab (called ww, not www) just as a target for port forwarding. After this lab you can delete it. 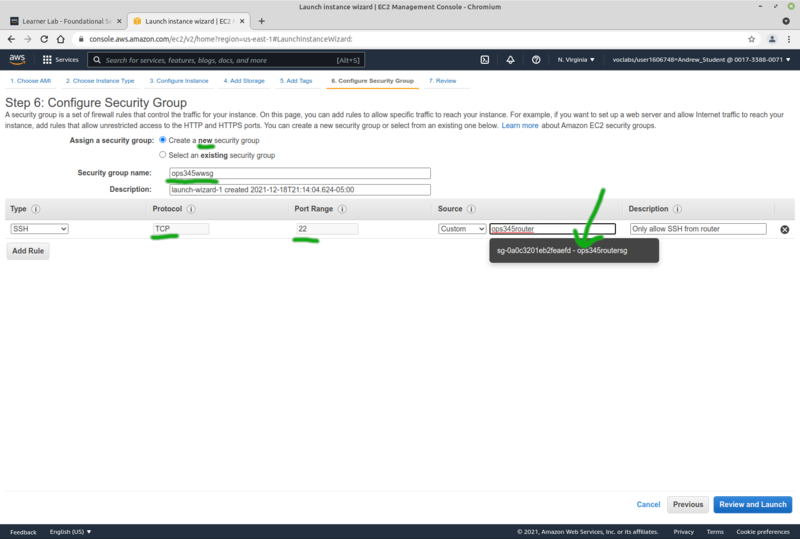 We won't set ww up as a web server in this lab, we just need something to forward SSH requests to.

Now you have a new VM (ww) which you can't ssh to even though it has a public ip. That's because the security group won't allow it. It does allow SSH from the router. But the router doesn't have the private key you're using as a password. Test all that to make sure. 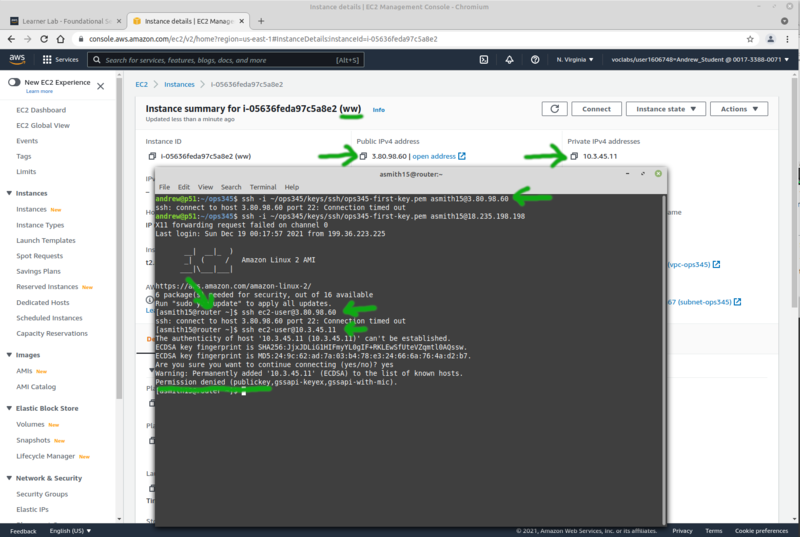 Port forwarding is when an incoming connection to a particular port is not processed by the machine receiving the connection, but instead it's forwarded to a different machine. You can forward a port to the same port on another machine, or one port on the first machine to another port on the second.

We're going to set up iptables on router to forward incoming requests to TCP port 2211 to port 22 on ww.

This Open Suse Documentation page has a nice simple diagram of iptables: 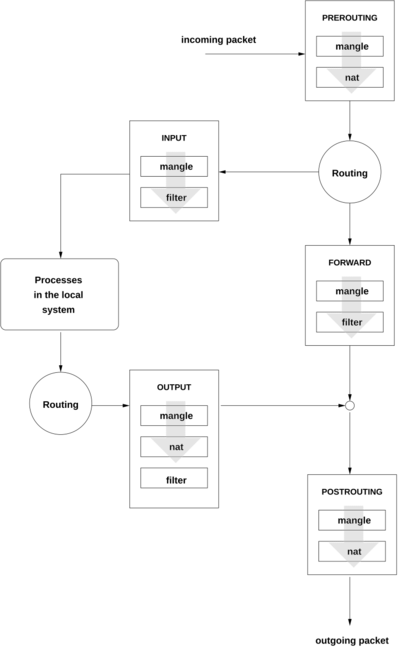 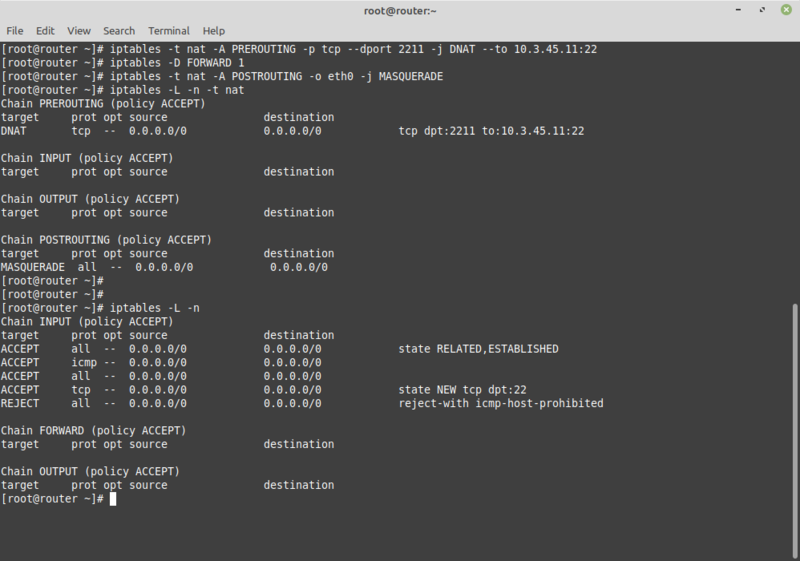 That would have been enough on a CentOS install, but in Amazon Linux routing is disabled by default in the kernel. So we have to enable it:

Once you're done you should be able to ssh from your workstation to ww via port 2211 on router: 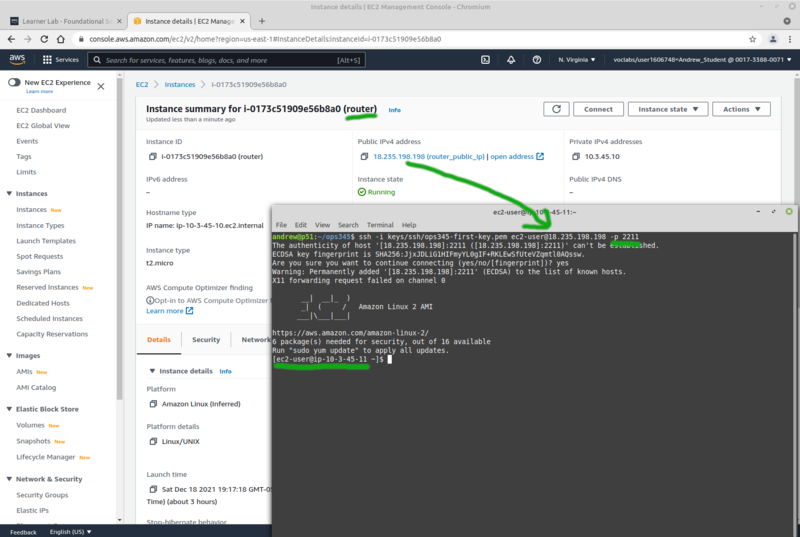 There are many variables in this setup. A couple of troubleshooting tools you can use are iptables logs and tcpdump: