Difference between revisions of "OSL840 Lab 1" 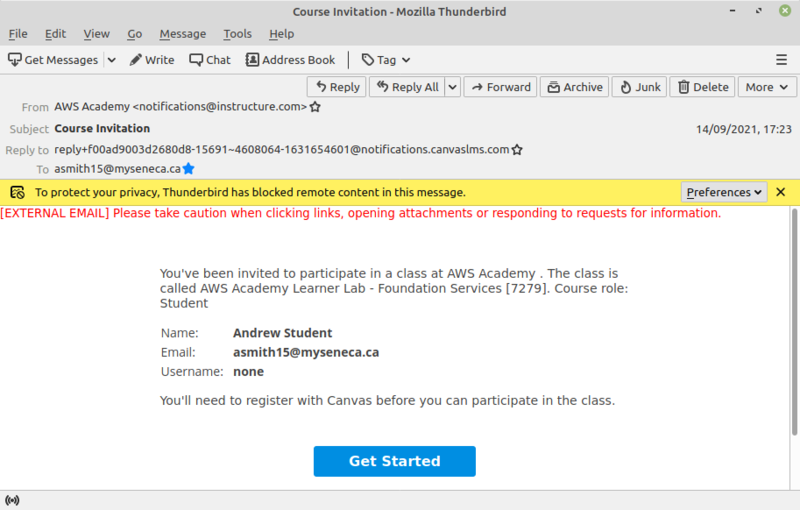 If you haven't received such an email: you need to let your professor know.

Once you complete setting up your account: you might want to bookmark this page, or even make it your home page: https://awsacademy.instructure.com 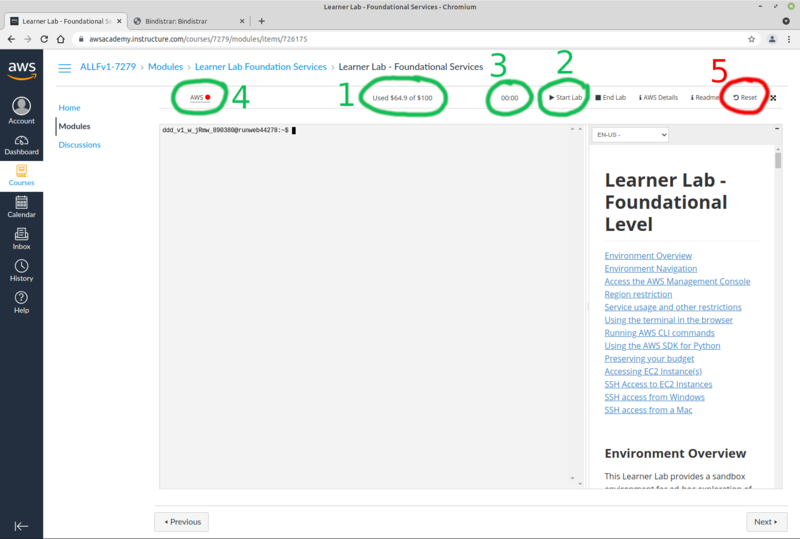 The links you'll use most often are highlighted in green:

The first time you start the lab it may take a few minutes, much longer than usual.

Normally using resources from AWS costs money. AWS costs are very competitive, but their resources are not free. In an AWS Academy Learner Lab you get a 100$ credit which will be more than enough to cover all your resources until the end of the course if you're not reckless.

You are responsible for your AWS usage!
If you run out of credits: you will have to find another way to finance completing the required hands-on parts of OSL840.

Take this as an opportunity during OSL840 to learn what costs how much money in the cloud. The skills of managing cloud costs are very valuable. Unfortunately AWS Academy doesn't make it easy for you. On the unrestricted AWS you have access to AWS Budgets, Amazon CloudWatch Billing Alarms, and other tools to help you monitor and control your costs. But due to the way AWS Academy was designed: you won't have access to those tools. That's in return for the free 100$, which most students don't complain about.

Even without the budget restrictions in AWS Academy: AWS costs are not easy to manage. Here are some examples of what you'll run into:

So in order to learn anything about costs on AWS: pay attention whenever you see a note about the cost of anything, even though it will be a distraction from what you're trying to accomplish at that time. There are many places where such notes are scattered. Always keep cost in the back of your mind when doing anything on AWS. Then hopefully you'll get a general idea, so that when you're done with OSL840 you can have an intelligent conversation about it.

Basic security on a public-facing server

Security is a topic most people aren't qualified to address. That's because it's complicated on its own, but in order to set it up properly: it also requires a solid understanding of the fundamentals of the systems which need to be secured.

That doesn't mean you can't learn it. As with most technologies, the recipe for success is simple. The more time you spend on it: the better you get. Every bit of learning you do related to security will make you more qualified. The more qualified you are to speak about security issues: the more valuable you are as a technician or engineer. Even if you're not directly responsible for security of a system: you will always have to work with security measures, and sometimes around them.

Your attitude matters
Usually if you follow the rules of the organization you work for: security breaches are somebody else's problem. But not always. For example if you get your AWS Academy account suspended by Amazon because your password was "123" - I won't feel bad for you, and you will have to find a way to complete the requirements of the course. And whether it's your problem or not: wouldn't you rather be a part of the solution?

So as with AWS costs there are some steps I can tell you to follow, but overall you should take some time to think of security whenever you do anything. Who has access to a specific machine? Network? Service? Storage device? Is it hard to steal/crack a password and impersonate one of your users? Is your system vulnerable to off-the-shelf attacks? Keep those questions in the back of your mind, and as a minimum follow the following guidelines:

Remember that unlike ULI101/OPS245 your servers are on the real internet, and depending on how you configure them: they might be accessible by any attacker on the planet. You need to pay much more attention to security in this course than was required in ULI101/OPS245.

We're going to set up a virtual machine in AWS now so you can start to get used to the process. You'll be repeating this several times during the course, try to learn a little more about it each time you do it.

A security group is a fundamental concept in AWS. It's not completely clear what it is. The closest thing you would have seen that's similar is a set of iptables rules. You can assign the security group (this set of rules) to one or more virtual machines.

A security group with no rules does not allow any traffic to pass through. 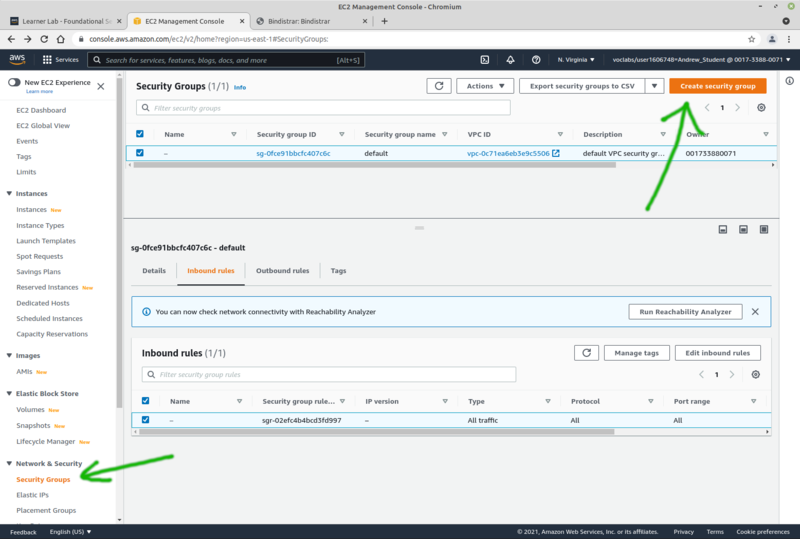 In AWS language an instance is what you've called a virtual machine in OPS245. An AMI is a pre-built disk image of an operating system, provided so that you don't need to install an operating system from scratch. The AMIs are typically provided by Amazon or the AWS community.

An AMI is only the initial disk image your VM will start with. As soon as the VM is booted for the first time: your disk image will begin to deviate from the original. That means for example that you have to keep up with security updates on it even though the AMI you used had all the security updates installed when you used it to bootstrap your instance.

With an AWS Academy account you can see what AMIs are available on AWS, but your selection is severely limited. We'll only be using the Amazon Linux AMI. You'll find it quite familiar as it was originally based on CentOS.

After you review your configuration and click "Launch" a popup will come up asking you for a key pair. It's important for you to understand what it's asking for. It is the same type of SSH key pair that you've created and used in the OPS245 Lab 7. Remember that your private key is yours, it's private to you, and not for anyone else to see. AWS is asking you to give them the public key which is the pair of the private key which you wish to use to log in to your new VM. In this case your private key is the effective equivalent of the root password.

Yes, that means AWS generated your private key and theoreticaly they could keep it, but they promise that they don't and that's almost certainly true. Once you donwload the private key and click "Launch Instances" - the only way to log into your new virtual machine is using the private key you saved. AWS does not provide the equivalent option of "reset your password" for instances that were already created. 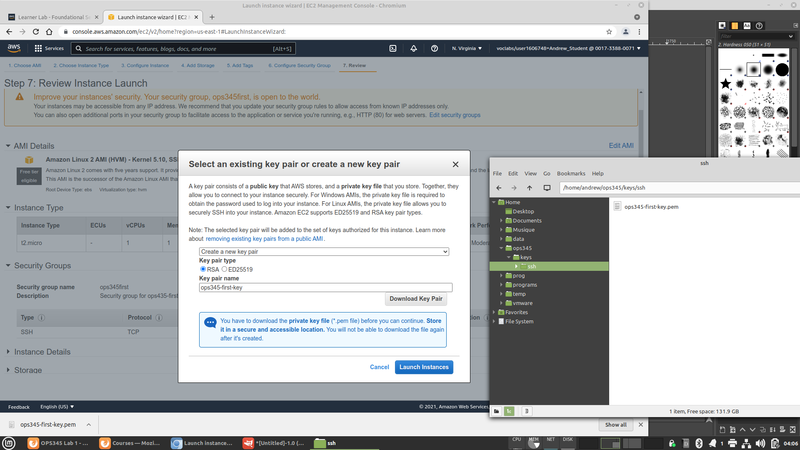 You're not going to find a button in the AWS to "view the screen" of your virtual machine. The only way to control it is via an SSH connection.

Look at your ops435-first instance details and find its automatically-assigned public IP address. Connect to it with SSH. Note that you need to user your private key to connect, and since it doesn't have a default name nor is it in the default location for SSH keys: you need to specify the path to it manually.

The default username on Amazon Linux is ec2-user. 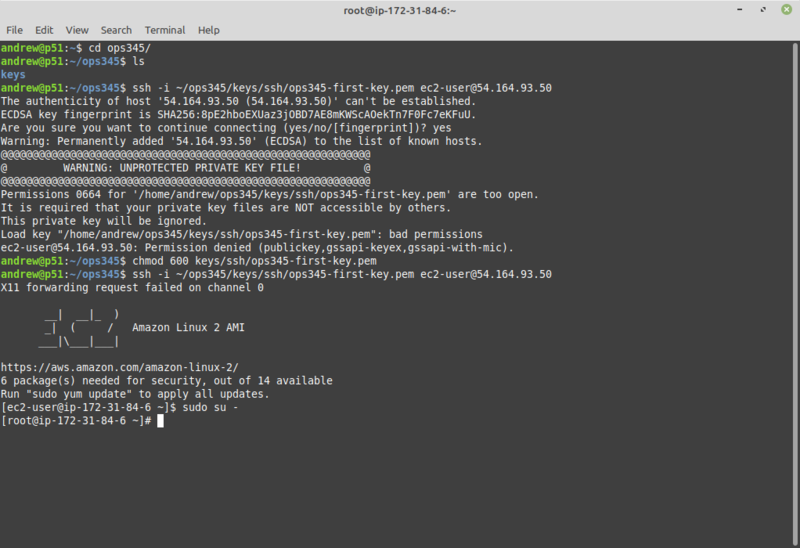 You have at least one semester's worth of experience of CentOS, so look around to see if anything looks different from what you're used to. For example:

It's not completely clear what Amazon's policies are for supporting Amazon Linux. From people's experience it appears to be quite stable, but as a rolling release you might not want to depend on it for production use. For our learning purposes it's plenty stable and consistent. One nice thing about Amazon Linux is that it is not linked to RedHat/IBM support cycles and policies which have changed significantly after IBM's acquisition of RedHat.

For security purposes we're going to remove the default ec2-user. That would be simple if you were sitting in front of the machine, but since you can only connect to it via SSH and the only user you can SSH as is ec2-user: it takes some extra work. You're going to do this for every machine you create in OPS345, so get used to the steps. It's good practice:

You do not need to set a password for this user. Passwords can be guessed using a brute-force attack. SSH keys are practically immune to such attacks.

For reasons that are hard to explain quickly the hostname on your AWS VM is not static by default, but we'll make it static so it's more familiar to you. 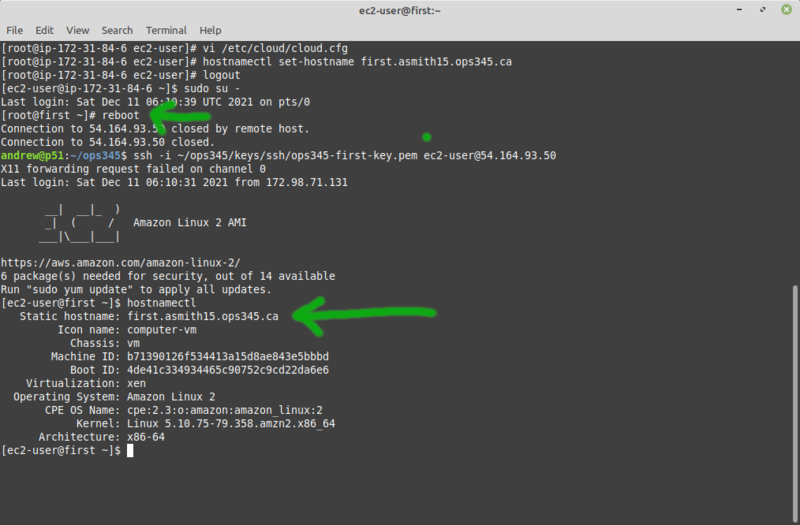 For this lab, please submit screenshots that show you've completed the work, unless your professor has given you different instructions.