Last week we got an introduction to administering a simple authoritative DNS server. This week we'll review those topics, and learn a few more record types. You'll learn still more about DNS in your first assignment.

Also if you didn't become comfortable using the dig tool - you'll get more practice with it now.

In still other (rare) cases there is no MX record at all (check littlesvr.ca) - in that case the server that's at the IP for that domain is handling the email.

Notice that the response for your dig commainds for MX records contains domain names and not IP addresses. That means that when you look for a domain's email server - you may need to do a query for MX and another for A.

You should be comfortable reading and writing an MX record in the Bind configuration file. See the reference for the syntax.

Sometimes you want multiple domain names to point to the same server. The most common example of this is the www. subdomain. Use dig to find the main web server for Seneca or for CBC.

See the reference for CNAME to get examples of how to configure such records in Bind.

A TXT record can store pretty much anything, it's typically used for purposes that the desiners of DNS haven't though of themselves. For example a common use of a TXT record is SPF: a record that helps receiving email servers to determine the likelyhood that a message is spam.

Configure at least one of each of the records above for your domain served by the Bind server in your vm1 and verify that your records work.

Every IT company needs to do testing - whether on software they create or systems they set up. Whenever you have a job to do - there has to be a way to show that your job is complete and correct (according to original expectations).

How much detail goes into the test plan depends on the resources available for testing, the scale of the changes, and the risk associated with getting things wrong. In your case the worst that's going to happen if you misconfigure a server is you'll lose some marks. In the industry a mistake like that can cost the company you work for a lot of money (perhaps even more than your salary).

Whether you have an extremely detailed process or something quick and simple - your test plan must be made with a well organized set of test cases.

Theoretically you write the test cases before you complete the system. In a way the test suite (all the test cases combined) determine the requirements for your system.

Generally speaking each test case typically has at least one expected positive and some number of expected negative results. For example if you're setting up a DNS record for www.yoursenecaid.org your test case might look something like this: 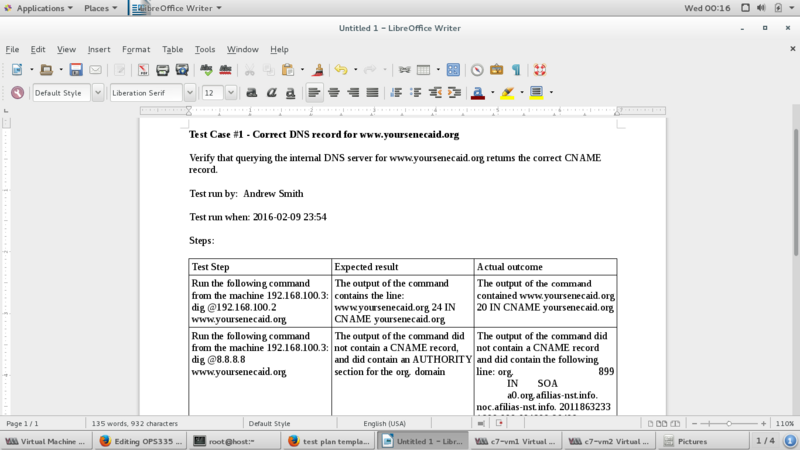 The test above shows a few things: that the DNS server is running, that it's accessible from the internal network, and it is serving the correct record. It also shows that the needed record does not propagate to the public DNS servers - the server 8.8.8.8 doesn't have the same record that your private server does. That's not a wonderful result but it's what you were expecting so it's still a positive result. In fact if 8.8.8.8 returned an A record for your query - you should be concerned that the rest of your test cases may be incorrect.

You can spend an infinite amount of time running tests and stil not prove anything definitively, so you have to do your best to make sure the tests you run are representative of the requirements - that after a successful run of all the tests the service is almost certainly working correctly.

Test cases (in a test suite, in a system that keeps track of them) are not intended to only show that the system is working. It's equally valuable to see that at some point in the past there was a problem. In that case there may be a bug number or some other means of tracking down what caused the problem in the past and how it was fixed. So recording failed test results is just as important as recording passes.

When I check your lab - I normally ask you to run some commands, and I'll ask you some questions, and that is a sort of made-up-on-the-fly test suite for your lab. Let's formalize that for one section of one lab in a set of test cases.

Pick any section of any lab you like that would justify having at least three test cases. Write the test cases in a template, save a copy of that for the current test run, and execute the tests, recording the results.

To submit the lab - show that the new DNS records you created are served correctly and show your completed test plan.