Difference between revisions of "OPS235 Lab 8"

There are different ways in which computers can be networked together. Some computer networks (such as computer labs) configure their workstations for static IP addresses for security and to provide other interesting features such as WOL (Wake Up on Lan) which allows a signal from a computer system to remotely start all or specified workstations within the lab.

Hot-spots (such as cafes or airport lounges) offer the ability for users to connect to the Internet (via DHCP) from their mobile devices (notebooks, netbooks, tablets, or smart phones). Finally, there are hybrid solutions that may offer both fixed IP address (computer workstations) and allow for wireless connections (via DHCP) to a mobile devices (like at your Seneca computer labs).

In lab6, you learned to connect your VMs to a VPN using a fixed IP Address. In this final lab, you will learn to set-up a DHCP server to automatically assign IP Addresses upon connection requests.

This lab will demonstrate setting up a DHCP server. The term DHCP stands for Dynamic Host Configuration Protocol. DHCP allows computers (eg. workstations, notebooks, smart-phones) to be automatically configured so that they can communicate over a network. This automatic configuration has gained popularity over the years, especially as the need for detecting and configuring portable computer devices increases. DHCP configuration allows for various setups including: Dynamic, Automatic, and Static allocation.

Part 1: Installation of a DHCP 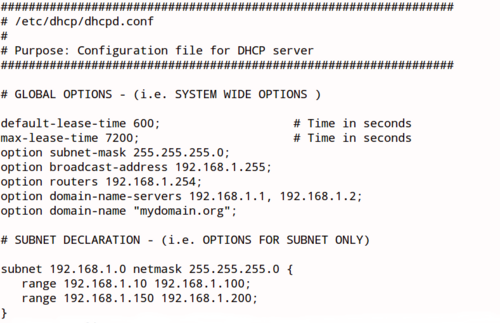 NOTE: Any errors in this file (such as typos or missing semi-colons) can cause the DHCP server not to restart!

Part 4: How do I test my dhcpd service on my virtual network?