The purpose of this lab is to discuss how a Linux system administrator can manage partitions including adjusting the size of their Linux systems if space is required.

The df and du commands are useful tools for Linux system administrators to flag disk space issues and investigate their causes.

Another essential duty of a Linux system administrator is to anticipate problems and take preventative measures to avoid computer system problems before that occur.

This emphasis on this section focuses on how to run useful shell scripts or shell script that we have created at specific dates/times. It would be silly to expect a system administrator to stay up late (eg. 2 a.m.) to manually run a shell script to terminate processes or to re-boot Linux servers. Database files (tables) are used to provide instructions on how frequent shell scripts or commands can be run.

The cron daemon is used to refer to these files and to run them on a pre-determined basis. The term cron comes from the old word chronograph meaning a special type of watch (actually a stop-watch) to help monitor and schedule routine tasks.

In order to automatically run the above-mentioned script periodically, you use the scheduler in Linux called crontab. The term crontab stands for Chronograph Tables, where a chronograph is the old term for a timepiece (the forerunner of the modern watch). You can run the crontab command to schedule commands and shell script to be run in a number of different ways.

Monitoring and ensuring adequate space for a Linux file-system is considered to be a critical task for any system administrator. An application called LVM is a very useful tool for Linux system administrators to easily manage file systems - even when the computer system is running! 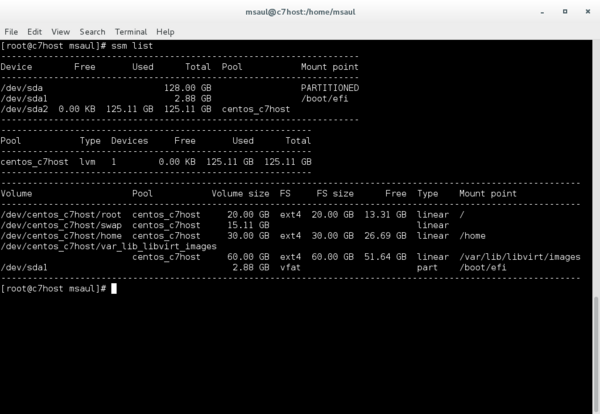 Graphical programs like system-config-lvm are deprecated, and no longer come bundled with Centos. There are other graphical LVM programs, but are for the KDE desktop environment as opposed to Gnome. Command-line tools such as ssm (System Storage Manager), fdisk, mkfs, pvcreate, lvextend, and lvreduce are sufficient to resize file systems when using LVM.

We will now use LVM in order to grow and reduce our file system, using extra unallocated space on our existing (default) virtual hard disk for our centos2 VM.

Let's say that you have run out of disk space on your centos3 VM, and you need more space on the root file-system in order to host more web-pages, or to support a larger database. What are your options? Getting a replacement hard-drive would probably require re-installation of the operating system and/or backing up and restoring data on the old hard disk.

Because we're using LVM we can avoid this problem. We can add a new virtual hard-drive (which will serve as a physical volume) to the volume group, and extend the root logical volume to make use of the new available space. Creating virtual hard drives is not only inexpensive, but a great way for students to learn now to simulate growing the size of the file system.

Using the mount command with no arguments displays file-systems that are already mounted. The Linux system administrator can use the mount and umount commands to connect and disconnect different partitions from the file-system to perform maintenance.

We take for granted that a file-system must be mounted (for example the root partition) in order for a Linux system to be usable upon system start-up. We need to learn now to do this manually by editing or adding an entry in the file system table (/etc/fstab). This file contains entries to mount various file systems automatically upon start-up of the Linux system.

The Linux system administrator also has the ability to manually mount (connect) and un-mount (disconnect) partitions in order to perform maintenance on the file system (for example un-mounting the /home partition to install software and prevent users from logging in during that process).

An Interesting Question: If root needs to unmount the /home directory for maintenance but we had to first login in graphically as a regular user, then su to "root", isn't our regular user still logged in so we can't un-mount the /home directory?!? How can we as a Linux System Administrator get around the problem (hint: you already learned it somewhere in lab3!!! Wow, using what we already taught can pay-off in the future ... lol!).

Answer the INVESTIGATION 2 observations / questions in your lab log book.