Difference between revisions of "LEAP ILP 32"

This page describes the process of creating ILP32 support for LEAP.

At the current state, gcc-ilp32 (gcc-4.9.2) is created to be correctly installed in the separate tree (/opt/ilp32/). Latest version of gcc can be found here: http://blue/koji/buildinfo?buildID=30942 It correctly produces Aarch64ELF32 files, using the technique, describe below in "Testing ILP32" section. Binutils 2.24 were created to provide scripts that are needed by the linker to work with ILP32 files. There will not be two different versions of Binutils, only one, with the scripts already there. Latest version can be found here: http://blue/koji/buildinfo?buildID=30943

Currently, we are missing some 32-bit C/C++ libraries. While compiling a file in ilp32 mode is generally successful, some generic C/C++ libraries are present only in 64-bit. To successfully produce 32-bit versions, we need to compile GCC in MultiLib mode, which supposedly will generate those libraries. We found this information after checking the build logs for Fedora gcc, to see at what point and what command 32-bit libraries were generated. https://kojipkgs.fedoraproject.org//packages/gcc/5.2.1/1.fc22/data/logs/x86_64/build.log build log shows that 32-bit folder was created in libgcc/Makefile.in. There we found that the directory uses default gcc macro to name MULTIOSDIR, which on our builders is different from what it needs to be. We created a patch to hardcode that value to what it needs to be ("32"). Next step was to enable multilib support in gcc-ilp32.spec. For that we added aarch64 architecture to the list of architectures with multilib support. Unfortunately, to compile a compiler with MultiLib support, one would need to use another existing on the system compiler with MultiLib. Since out gcc was build without such support, it doesn't come with the required libraries. We have two options here. Wither use Fedora gcc, or see if we can use APM drop gcc. First, we tried to use Fedora gcc as that MultiLib compiler. Unfortunately, building gcc using that Fedora compiler crashes with a message "C compiler cannot create executables". This problem is believed to occur if there are missing or corrupted libgcc, gcc-c++ and/or libstdc++ packages on the system. Reinstalling those packages on LEAP system didn't help. We tried to use APM drop gcc, but it would crash pretty quickly as well, with the message "error: gmp.h header not found". Unfortunately, reinstalling gmp and gmp-devel packages did not solve this problem. With the freshly installed Fedora 21, and fully installed gcc package from Fedora repos, we tried to build gcc again. This time it broke while trying to build "libgomp". Checking the build logs showed that the problem is: "/usr/bin/ld: cannot find -lgcc_s". The file "libgcc_s" is present in /usr/lib64/, which is the default. Somehow, the linker still doesn't find it. On the following screenshot, you can see the building error (left), the build log with the exact error (middle), and the corresponding code within the configure file (located at "rpmbuild/BUILD/gcc-4.9.2-20150212/libgomp/"). 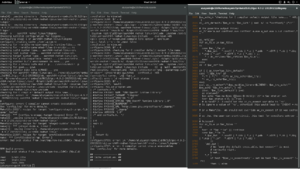 We need to put some echo statements in the mentioned above configure file to see if the guesses were correct. and LDFLAGS was the problem. If it was, we need to create a patch that would change the value of LDFLAGS to what we need, or, possibly, simply create a link in the correct place to the existing file. Then we will try to build our MultiLib capable gcc on that system. When succeeded, we will install our gcc on a LEAP builder, change the spec file for gcc to point towards that MultiLib capable gcc, and produce the final version of our gcc.

I changed "~/rpmbuild/SPEC/glibc.spec" file in the next way: I run "rpmbuild -bs glibc.spec" command to get the source rpm.