Difference between revisions of "GPU621/Go Parallel" 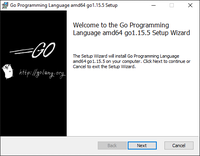 3. Lacks speed compared to C++ (But is much faster than other high-level languages)