The EHL is equipped with a Avocent Cyclades 32-port terminal server for access to the console port on specific development systems.

What is a Terminal Server?

A terminal server provides TCP/IP connectivity to RS-232 serial ports. Effectively, it lets you communicate with a serial port from anywhere on the Internet.

While this can be used for access to serial devices such as measurement tools and printers, or to enable a dedicated terminal to communicate with a network host, the terminal server in the EHL is used in a different way: it permits remote access to the serial console ports on computers within the EHL.

Most system firmware, boot software, and Linux kernels provide a console user interface. Only after the system is fully booted do network services become active.

The EHL terminal server is accessed through iraq.proximity.on.ca and has the local hostname "terminal".

The WIP EHL cabinet 2's terminal server can be accessed through morocco.proximity.on.ca and has the local hostname "terminal-2".

The web interface also provides a Java-applet-based client for port access, but it is usually better to ssh directly to the port (below).

SSH access is the easiest and best way to access console ports connected to the terminal server.

To install your SSH key on the terminal server:

Use of the serial Script

The serial script (/usr/local/bin/serial on morocco and directly-connected VPN systems) lets you connect to a serial port by hostname, e.g.:

The Cyclades terminal server is connected to device serial ports using RJ-45 straight-through (not crossover) cables. These are connected directly to the Cyclades unit on one end, and to adapters (RJ-45f to DB-9f or RJ-45f to DB-25f) on the other end. 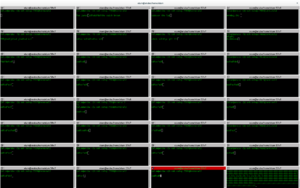 Testing of the Cyclades ACS32 involved crossing the RX and TX of two [DB9 to RJ45] converters [which are in turn connected via CAT5 (or better) straight-through cables between the converter and the port on the Cyclades]. This is done by connecting pin 2 of connector A to pin 3 of connector B, and vice versa. The ports on the Cyclades are then configured to accept SSH connection, and enabled. Make sure the ports are assigned the correct privilege user/group to connect to them, and ssh to them in the fashion shown on the PNG to the right -> .

Result: What you type in the SSH connection of one session, should appear on the ssh session of the corresponding port connected by the crossover cable. After testing that all ports can transmit and receive properly, one can conclude that the ports seem to be in working order.