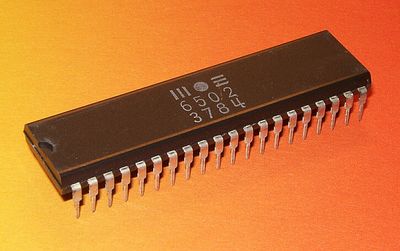 The MOS 6502 processor. Image credit: Christian Bassow - CC-BY-SA 4.0
The MOS Technologies 6502 processor was introduced in the mid-1970s to fill the need for a affordable general-purpose CPU. Its low cost (US$25 at introduction, less than C$0.89 now) was less than one-sixth of competing CPUs, and it had very simple circuitry requirements which made it simple and inexpensive to incorporate it into products. Tje 6602 (or a slight variation) was therefore used in many home and personal computers, such as the Apple II; the Commodore PET, Vic-20, and C64; the Atari 400 and 800; the BBC Micro; and games such as the Nintendo Entertainment System (NES), Atari 5200, and Atari 6200. A number of variations of this processor have been produced, using different semiconductor processes, integrated peripherals, instruction and data-width extensions, and pinouts. Several different versions are still in production for various embedded applications, and it remains a popular chip for homebrew system builders.